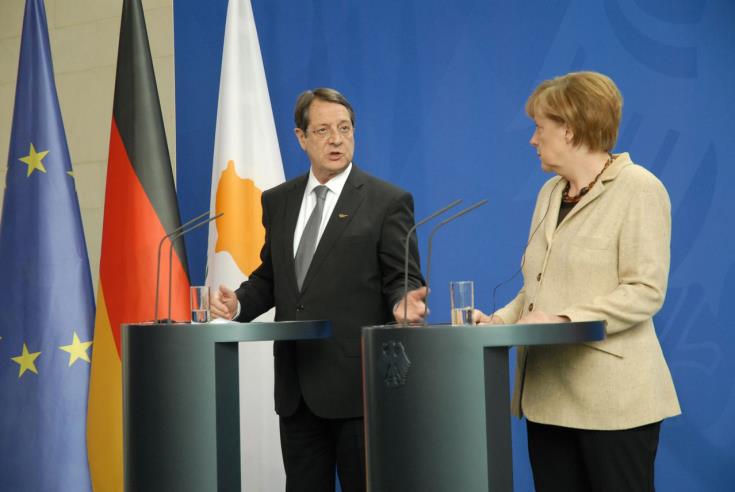 President Nicos Anastasiades, will have a tete-a-tete with German Chancellor Angela Merkel in Brussels where he will fly on Thursday to attend the European Council meeting that will take place on July 17-18, Foreign Minister Nicos Christodoulides has said.

He noted that these arguments lack any seriousness, adding that it is well known to everyone how Turkey acts not only as regards Cyprus but also as regards the Eastern Mediterranean.

Christodoulides said that “we speak with all EU member states” recalling that President Anastasiades spoke with Merkel and he himself spoke with Foreign Minister Heiko Maas. He went on to say that Anastasiades will meet with Merkel in Brussels where he is flying on Thursday to attend the European Council meeting taking place on July 17-18.

Christodoulides said that he has been informed by his EU counterparts that Turkey is consciously making this effort, noting that Turkey’s proposal for the need to have a dialogue between Greek Cypriots and Turkish Cypriots says that the dialogue should take place with Ozersay and not with Akinci. “This is another indication of the expediencies which Turkey is trying to serve through these suggestions or proposals that lack any seriousness,” he noted.

Asked if these suggestions were tabled by Turkey during the meeting among Greece, Turkey and Germany in Berlin he said that issues which concern the Republic of Cyprus were not discussed.

“The Republic of Cyprus is an independent EU member and no one discusses on its behalf,” he added.

Referring to the meeting which President Anastasiades had this morning with the UN Secretary General’s Special Representative in Cyprus and head of the UN peacekeeping force on the island Elizabeth Spehar, Christodoulides said that it was a constructive meeting and the issue that was solely discussed were the remarks of the Republic of Cyprus on the UNSG’s draft report, adding that President Anastasiades handed over these remarks in writing.

Furthermore, he said that the President noted the need that developments during the recent period are objectively outlined in the report, noting that the activities that have taken place affect negatively the effort for the resumption of the Cyprus talks from where they were suspended in Crans-Montana. “Therefore, the President outlined concrete remarks and the general framework that needs to be created so that there will be prospects for the resumption of the talks,” he said.

To a question about accusations by the Turkish Cypriot side that the Republic of Cyprus violates the Green Line Regulation and if Spehar brought up this issue during the meeting, the Foreign Minister said that Spehar did not convey anything concerning statements made on the issue and letters sent by the “foreign minister” of the Turkish Cypriot regime Kudret Ozersay.

He said that some people are intentionally trying to present the measures taken to address the COVID-19 pandemic as political ones. “There is no political expediency in the decisions taken, especially those that concern the crossing points. They have been taken on the basis of suggestions made by those who know better. We have not yet overcome the pandemic” he noted, adding that the Government needs to remain vigilant with a view to prevent a new outbreak.

“There were public statements that showed who is responsible about this situation and this does not concern only the crossing points,” he added, noting that there were no press releases on the part of the UN on efforts made to violate UN resolutions. He said that he referred to the issue of the fenced off city of Famagusta (Varosha), noting that the resolutions on this issue are crystal clear.

Christodoulides said that the discussion during Anastasiades-Spehar meeting was open, frank and helpful to efforts to outline things as they really are.

By In Cyprus
Previous articleCirculation of certain public documents between EU member states
Next articleTwo new Covid-19 cases, one traveller, one contact