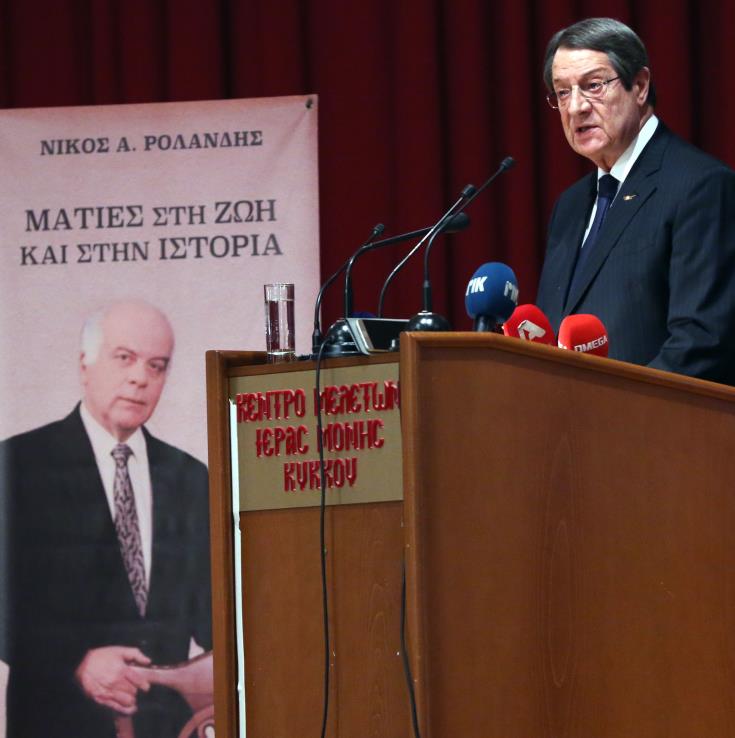 President Nicos Anastasiades said on Thursday  that what is required for the resumption of the Cyprus talks is mutual respect between the two communities in order for peace to prevail and in order to reach the conditions for peaceful coexistence, adding that what is also necessary is that one does not feel that the other is trying to impose. He said that he conveyed this message to Jane Hοll Lute, UNSG Envoy’s on Cyprus during a telephone conversation they had last night.

Speaking tonight during a book presentation of former Minister Nicos Rolandis entitled “Glances in Life and History” the President said that he reiterated to Lute our determination to finally attend a new round of talks that would create the prospects for a solution in line with the UN Charter, the formation of a normal, truly independent state, with no impositions of one community over the other.

He added that our will and highest priority, is achieving a just and viable solution to the Cyprus problem. The President also said that despite the Turkish provocations in our exclusive economic zone, we will proceed with our energy plans.

President Anastasiades said that we have proved that we respect the Turkish Cypriot community as we have accepted political equality and a positive vote where their interests could be negatively affected in the decision making, pointing out that what we want is for everyone to feel that his or her rights are safeguarded. He furthermore said that in a European state, the EU Charter protects the human rights but what is also important is for the community which is the minority  to feel that is shielded against abuse of power by the majority.

The President said however that we cannot accept what Turkey insists on and what the Turkish community keeps repeating that for every decision we need to follow the principle of co-deciding or to have a positive vote by the Turkish Cypriots. He said that this is not fair and does not lead to a solution based on mutual respect.

Cyprus has been divided since 1974, when Turkey invaded and occupied its northern third. The latest round of talks under the UN aegis ended without results in the summer of 2017 at the Swiss resort of Crans-Montana. Talks aim at reuniting the island under a federal roof.