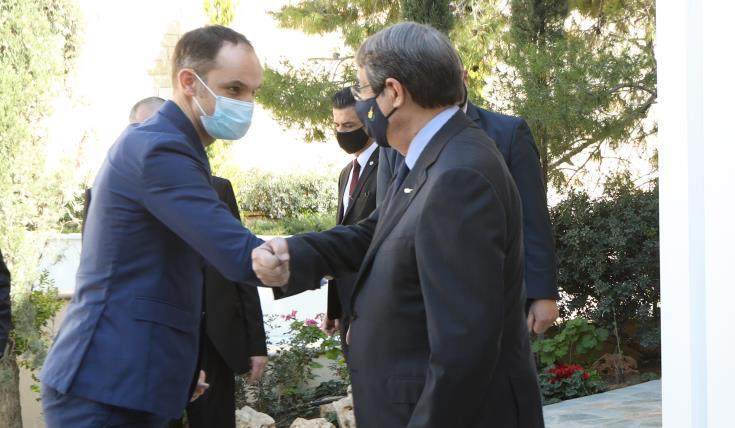 President of Cyprus Nicos Anastasiades on Saturday sent a message to the Turkish Cypriot side to work in order for concerns of all Cypriots to be met during a new round of talks for a solution, rather of those of Ankara. The call came a few weeks before the UN Secretary General  is expected to meet all parties in an informal meeting on Cyprus, in New York.

The President also once again reiterated his readiness to take part in a substantial dialogue for a solution.

His statements took place after he received in his residence in Limassol, Foreign Minister of Slovenia Anže Logar, who is paying Cyprus a working visit.

The President noted that during the meeting they discussed EU`s obligations towards the member states amid the crucial turning point Cyprus efforts are in.

The President referred to the meetings he had and will have on the Cyprus problem, namely the meeting he had with UK`s Secretary of State Dominic Raab, the meeting next Monday with Greek Premier Kyriakos Mitsotakis and his upcoming visit to Israel.He also said that during the next days EU`s High Representative will be on the island for consultations.

Cyprus President said that the UN Secretary General has decided to convene a meeting in order to agree on a common ground for the resumption of reunification talks, based on the UN and EU principles that will lead to a viable solution on a bicommunal,, bizonal federation.

Replying to a question he said that his message to all interlocutors is that we have the determination and political will to attend an informal meeting with no prerequisites. But he noted that when the  subsantial dialogue begins, we need to focus on the UN rules so that we can have productive negotiations.

By Josephine Koumettou
Previous articleShops to reopen with bargains on Monday to ‘get rid of’ stock, says Cyprus Retail Association
Next articleTractors, trucks block India’s roads as farm protests widen