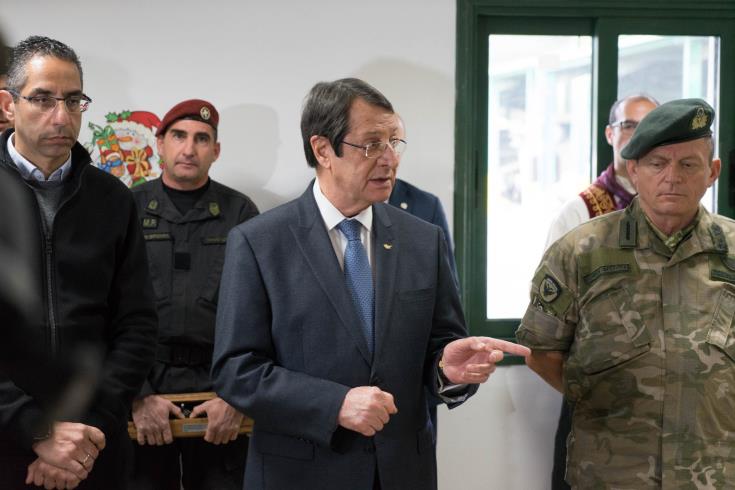 President Nicos Anastasiades has expressed the wish that a fruitful dialogue would lead to a solution that would allow, through stability and lasting peace, a prosperous future for Cyprus, noting that if we want lasting peace on the island, this can only be achieved through mutual respect.

The President, who visited on Thursday the military camp «Chrystanthos Mylonas», in Evrychou, in the Nicosia district, said that his wish for Cyprus is that finally a fruitful dialogue will yield results and  lead – through the logic of not one but of both communities – to a solution that will finally allow us through stability and lasting peace to have prospect and an auspicious future “.

According to a press release by the Presidency, President Anastasiades recalled that the UNSG has appointed a special representative to establish the terms of reference that would  allow for the resumption of a fruitful dialogue “something we have been pursuing for 44 years now, a fruitful dialogue that will lead us to a solution that will be acceptable to both communities, that will also be acceptable to the EU and be based on international law, a solution that will not allow the imposition of one community on the other.

Therefore, he said, and given “what I hear these days, I want to say that political equality is one thing, and it is another thing the claim that one community -through mechanisms that deviate from those that happen in federal systems internationally- wants to impose itself on the other community through special provisions”.

He clarified that “we are not talking about minorities or majorities, we are talking about the functioning of the state” in order to ensure its sustainability and ensure that fundamental principles of democracy will be finally implemented in this EU Member State, too. He added that Cyprus, for 44 years now, has been experiencing unacceptable violations, the Turkish occupation, the  usurpation of the properties of Greek Cypriots and the violation of human rights.

I hope, he said, that at last logic will prevail, “not that which dictates to Mr Akkinci to advise me that I must change mentality, because my answer is simple: let him show me a similar state of the model that he wants to create in Cyprus, a similar federal model, where one of the constituent states determines the fate of the other one, through the mechanisms of the positive vote. Let him show me another country, not a federation, which is under the guarantee of a third country, which has invaded and occupies territories of the other country ”

He stressed that if we want lasting peace, we will only achieve it through mutual respect.

“I believe that now is the time that we all, Greek Cypriots and Turkish Cypriots, but especially the leaderships, and expanding this to those who control some of the leaderships – and I clearly imply the power that controls and occupies the northern part of our homeland – to realize that,  if we want a permanent peace, if we trully want prospect – and this is what we have been pursuing for so many years – it is only through mutual respect that we can achieve it, by creating those conditions that would finally allow us to give hands and give prospect to the future ”

He told the officers and soldiers of the military camp that the state owes them a lot and recognizes the service they offer to those `of us who negotiate the solution of the Cyprus problem.” and said that he will not allow for anything less than what any European state would expect.

Later on, the President and the administration of the military camp exchanged gifts on the occasion of the holidays and the President wished the officers and soldiers all the best for them and their families in the new year.