President says he is ready for tripartite meeting, no objections regarding time and place 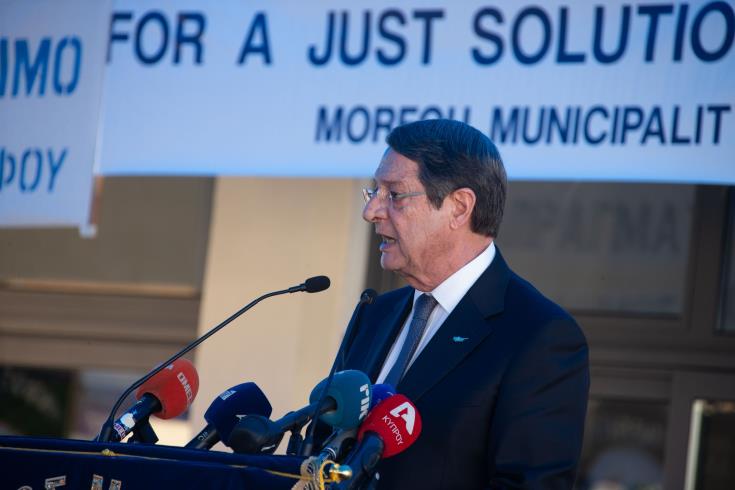 President of Cyprus Nicos Anastasiades said on Sunday that he is ready to enter talks, adding that he has no objections with regard to the place or date of a tripartite meeting with the UN Secretary-General Antonio Guterres and the Turkish Cypriot leader Mustafa Akinci.

Moreover, he expressed hope that the voice of Cyprus will be heard loud and clear at the European Council, next Thursday, and that decisions will be taken concerning Turkish actions in the exclusive economic zone of the Republic of Cyprus.

Addressing the 39th Morphou anti-occupation rally, at the Astromeritis Cultural Center, a few meters away from the roadblock leading to the occupied town, President Anastasiades said he is determined to work for a settlement, but not for “any solution”, and added that there are limits to the concessions that can be made.

Replying to criticism, the President wondered if he should ever accept a solution providing for Turkish guarantees, the permanent presence of Turkish troops on the island and a positive Turkish Cypriot vote on state decisions, that would paralyze the state.

He said that he will work tirelessly in order to achieve a peaceful solution to the Cyprus problem, that is truly viable and functioning and will allow people to hope.

“I am willing, I am ready for a meeting anywhere, I made this [clear] during my recent meeting with the Secretary-General” President Anastasiades said, in relation to a tripartite meeting that would lead to an agreement on the terms of reference and the resumption of settlement talks.

He said that he has no objections whether the meeting will be held in Paris or elsewhere, nor has he any objections about dates.

Moreover, the President underlined the need to contribute to a spirit of consensus and of confidence-building in order to allow for the resumption of talks, pointing at the same time to Turkish actions in the exclusive economic zone of the Republic of Cyprus, which he characterized as “a second invasion.”

He said that unity is required, due to “visible dangers” and pointed towards Turkey’s military operations in Syria. He referred to powerful countries, permanent members of the Security Council, and said that there is only disappointment with their stance vis-à-vis the Turkish invasion in Syria.