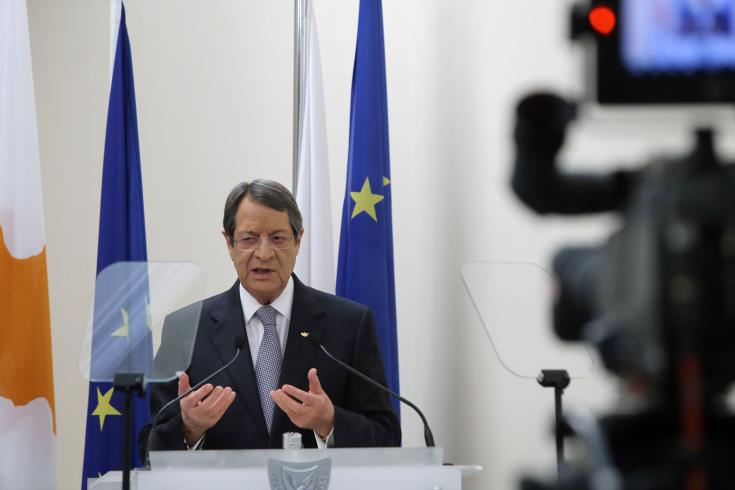 President of Cyprus Nicos Anastasiades said on Tuesday he aims at a Cyprus solution that will stand the test of time and expressed his belief that Turkish Cypriot interlocutors with good faith will accept the concern of the Greek Cypriot side and his proposal for decentralized powers.

Replying to media questions, in the framework of a press regarding his proposal for a decentralized federation as a form of settlement of the Cyprus problem, the President also clarified that “the exclusive economic zone, which is the natural wealth of the country falls under the provisions for the unity of state, land, territory, people, economy.”

Addressing another question on energy, he said that “I will not accept the suspension of Cyprus’ sovereign rights or put now at the table for discussion energy issues, after we have agreed that natural wealth belongs to all legal residents of Cyprus.” He went on to say that exploration and exploitation activities in the EEZ are different things. Those interested in protecting the right of the Turkish Cypriots in any future proceeds coming from natural gas, may vote the draft bill that is pending at the House of Representatives, aiming to adopt the Norwegian model, he added.

The President of Cyprus also said that in the event of a settlement, the only existing EEZ will be that of the federal Cypriot state.

President Anastasiades was also asked about a meeting he had last September with Turkish Foreign Minister Mevlut Cavusoglu, in New York. He said that in reply to Cavusoglu, he told the Turkish official that the way to ease possible concerns and achieve a Cyprus settlement is to proceed with decentralized powers.

The viability of the state “should be everybody’s concern” he added.

He went on to say that the Turkish Cypriot request for a positive vote on every decision, either in the Cabinet or in other organizations “will cause problems regarding the viability of the state.”

I have made it clear that I aim at a viable state that will not end up in an impasse, he underlined. Furthermore, he referred to the reflection over the form of the solution, noting that our side needs to accept it first and foremost, in order to be able to support it. Moreover, he said that we need to think about the impact of a possible second negative vote in a referendum, in a reference to the 2004 referendum over the Annan plan that did not secure the vote of the majority of the Greek Cypriots.

It is not enough to achieve a settlement, only to see it collapse the day after or in order to satisfy third parties, rather the solution “has to satisfy the needs of the people, Greek Cypriots and Turkish Cypriots and meet their concerns” the President noted.

Replying to a relevant question he also said that together with Turkish Cypriot leader Mustafa Akinci they have decided not to be present at the opening of the Lefka/Aplici and Deryneia crossing points on November 12.

“I seek a solution which will stand the test of time, which will be able to respond to the expectations and the concerns of Greek Cypriots,” President Anastasiades said. “We are sensitive to Turkish Cypriots concerns and they should also show the same sensitivity if we truly wish to create conditions of peaceful co-existence,” he added.

Replying to a comment that more details of his proposal were expected to be outlined tonight he explained that his proposal is “food for thought” so that it can be shaped together after having received the opinions of experts so that we can see what powers can be transferred.

Asked whether he should have done more to cultivate a culture of peaceful co-existence between the two communities he wondered “what should we have done that we haven’t?”

Referring to former President Demetris Christofias he posed the question why the Cyprus problem wasn’t solved in his presidency during which he tried to prove his good intentions and determination to this effect.

“Was it Christofias’ fault, or  was it because the other side was intransigent?” he wondered.

Replying to another question he said that “no one claims that the Guterres framework resolves all the issues of the Cyprus problem.” The point is what the framework will include, and the mandate which will give Jane Holl Lute, the UN SG’s personal envoy, to play a role which will help the two sides overcome existing problems, he noted.

Asked what will happen if no agreement is reached on these problems, he said that the Secretary General may not decide to go ahead with the resumption of dialogue.

Replying to another question President Anastasiades said his proposal facilitates the resumption of talks because it creates certain new developments which allow for the state to be functional.

We seek the resumption of a dialogue which will lead us to a solution, he said, adding that the confidence building measures have been adopted for some time now.

What we wish is to facilitate contact between the two communities, he reiterated, adding that the Greek Cypriot side has already put forward two alternative crossings between the government-controlled and the Turkish-occupied areas in order to facilitate residents in Pyrgos and Athienou, but unfortunately the reply is that they are “military zones.”

At the same time, he made it clear that he has not expressed optimism but rather views that can help the process move forward. Decentralisation is not an obsession, as long as the right of vote is regulated, he pointed out.

Replying to a question on mobile telephony between the government-controlled areas and the occupied areas, President Anastasiades said that there is an absolute will on our part and it was our proposal, adding that the other side insists to have political gains through the recognition of illegal companies registered in the occupied areas, something which could not work.

By In Cyprus
Previous articleEU could impose sanctions if no deal with Italy, but no decision yet – Moscovici
Next articleDemocrats take control of House, Republicans retain Senate