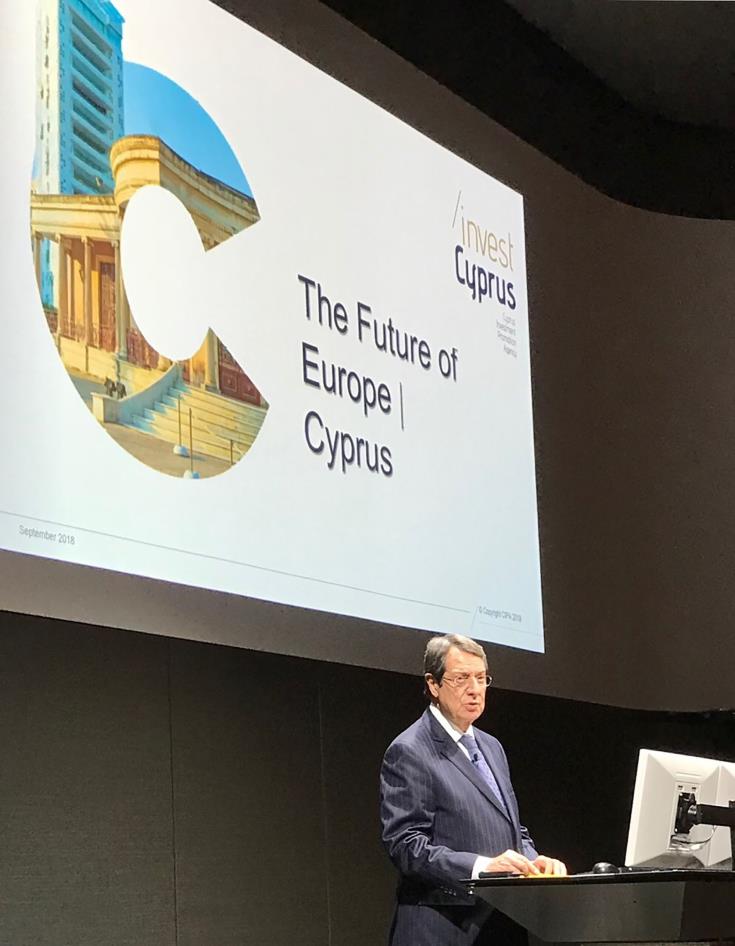 President Nicos Anastasiades has said that what Cyprus has achieved following the financial crisis is “nothing short of a remarkable recovery, confirming the resilience and strong foundations of Cyprus’s economy and the excellent prospects of its key productive sectors.”

He was addressing a business dinner organised by the Cyprus Chamber of Commerce and Industry, in cooperation with the Ministry of Energy, Commerce, Industry and Tourism in London on Friday evening.

President Anastasiades made special reference to the high growth rate, the consecutive balanced budgets, the fall of unemployment, the “stronger and healthier” base of the banking system, as well as the reforms in the public administration, the welfare and healthcare system and tax administration, but also the enhancement of the tax and legal frameworks, and the incentives for new entrepreneurial activities.

“As a result of the above-mentioned, Cyprus, being in the ‘junk’ category seven years ago, it has enjoyed consecutive category upgrades by international rating agencies which last week resulted to Cyprus rated to investment grade. This affirms the promising economic outlook of our country, vindicates the efforts of our compatriots and of the productive forces of the country and at the same time sends a strong message to new investors, taking also into account existing substantial investments in a wide range of sectors, from banking, to sea-ports, to Marinas, to the largest integrated casino resort in Europe, energy and auxiliary services,” noted the President.

He added that his government’s plan is “to remain focused on maintaining and broadening the conditions under which surpluses and high growth rates can be generated, to continue promoting structural reforms and improving the country’s business environment.”

In order for this to be achieved, he added, strategies for the transformation of the public service and its transition to the digital era are intended to be implemented, such as the full digitalization and implementation of e-government in all state actions.

President Anastasiades also said that the discovery of natural gas reserves within Cyprus’s Exclusive Economic Zone creates exciting investment prospects, including for auxiliary service providers, many of which have already established subsidiary companies in Cyprus.

He then referred to important opportunities for international investors in sectors such as Renewable Energy Sources, technology, real estate, telecommunications, research and innovation, and education, while a series of tax incentives are also provided for the growing start-up industry.

Having referred to the “long-standing excellent relations, based on deep-rooted historical, political, economic and cultural ties and amicable people-to-people contacts” between Cyprus and the UK, President Anastasiades reiterated that Cyprus fully supports all efforts towards reaching mutual compromises on Brexit, which will ensure a smooth transition to the new state of affairs.

“Based on our common values, principles and interests, as well as our economic collaborations and friendly relations between our two countries societies, despite challenges which might arise, we are also committed to engage in an intensified bilateral dialogue in order to redefine the web of our relations and provide further impetus towards strengthening our partnership. My government is committed to remaining a reliable partner in facilitating business and investment initiatives originating from the UK,” he concluded.

By In Cyprus
Previous articleGovernment makes representations to UN over fishing boat detention by Turkish forces
Next articleWe must not take the EU for granted, Commissioner Jourova says