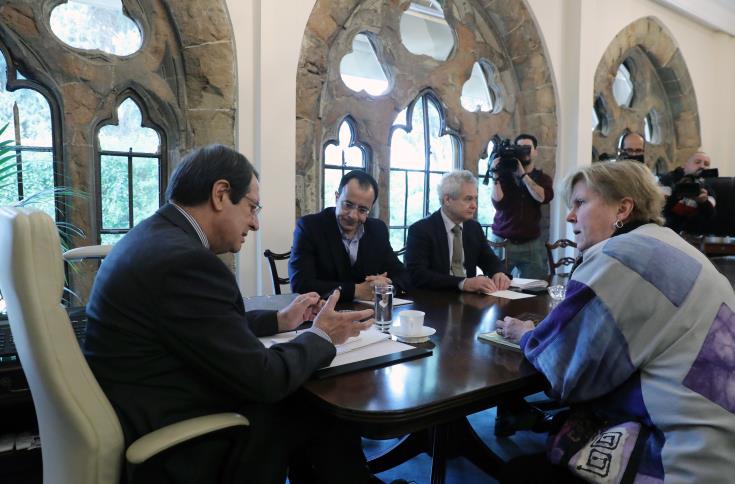 President Nicos Anastasiades has reiterated his determination to work for a viable solution to the Cyprus problem as soon as possible and has outlined new ideas within the Guterres framework to UN Secretary General`s envoy Jane Holl Lute during their meeting on Sunday, said the negotiator of the Greek Cypriot side Andreas Mavroyiannis.

He said that the President outlined new ideas within the framework of the UN Secretary-General, the so-called Guterres framework, adding that the President referred, among other things, to the decentralization of powers, “ideas he has already elaborated upon in the past.”

In regard to the Turkish Cypriot community’s claim for political equality as the Turkish Cypriot side perceives it, Mavroyianis said that it  is “a completely and continuously expanding perception of the notion of political equality which is neither based on Secretary General’s report of `91 nor in the discussions that have taken place since then, nor in the Annan plan, the convergences of Christofias-Talat nor in the negotiations which have taken place over the last five years.

He said that President Anastasiades reiterated in a clear manner that he accepts the political equality as requested by the United Nations and as recorded in the Secretary General’s report,” adding that he also accepts the concept of effective participation of Turkish Cypriots in the governance and the use of a positive vote where the circumstances are such that it will be used in order not to negatively affect the interests of the Turkish Cypriot community.

“It is clear to the President of the Republic that there is neither the intention nor do we want any regulation which will allow one community to make decisions that are detrimental to the interests of the other community,” he said.

He said that in order to move towards this direction, it must be clear that there will be an effective mechanism to overcome deadlocks, making it clear that we are talking exclusively about those decisions and not for all decisions as it the position of the Turkish Cypriot side.

Apart of the issue of political equality, he added, the President of the Republic focused on all the issues of the Guterres framework, including the issue of abolition of guarantees and intervention rights, troop withdrawal, territorial and other issues included within the SG’s framework.

Mavroyiannis said that essentially, Cyprus President’s aim is “to create the conditions in order to have agreement on the terms of reference which could in turn create the conditions for a truly creative dialogue which will lead to achieving a functional and a viable solution to the Cyprus problem. ”

He noted that in order for the solution to be functional and viable certainly it should ensure the existence of a truly independent and sovereign state that can operate.

He said that the President also clarified all the questions raised by Lute and once again reiterated and conveyed his readiness to have a joint meeting with Akinci in the presence of Lute, showing a fully constructive attitude vis–à–vis all efforts that can lead to the resumption of dialogue from where it was interrupted in Crans – Montana.

Asked if a step forward was made regarding the terms of reference, Mavroyiannis said that on 15 April the Secretary-General should submit to the Security Council a report on developments regarding his good offices.

He did not think it likely that “the Secretary General could announce that we have concluded on the terms of reference. The effort and work continue in this direction. But we are not there yet,” he said.

Asked whether steps forward have been taken since Lute’s last visit to Cyprus, Mavroyiannis said that this will be decided by the outcome. “We continue our consultations and efforts and the exchange of views, positions, arguments, we have not yet reached an outcome but the effort continues.”

Asked if Lute conveyed anything to the President on the matter of security and guarantees after her contacts with the guarantor powers, Mavroyiannis refrained from saying what Lute has conveyed to the President adding that “this effort continues”.

“What matters is that the President of the Republic has clarified our own perception of the need to end guarantees and interventions rights, to withdraw troops as part of a comprehensive package,” he said, adding that it goes without saying that these issues should be discussed together and in parallel.

Invited to say if the issue of the Guterres framework has been clarified for Lute, Mavroyiannis said that “it is also an ongoing discussion but what is clear is that we are talking about a SG package containing six points and we certainly do not talk about what the other side is saying that the issue is the acceptance by us of the notion they have on what constitutes political equality which is I said is constantly expanding.”

Asked if Lute would return to Cyprus, he said “we have not discussed when Lute will come back. The effort continues.”

Replying to a question if the fact that this is Lute’s fourth visit and no substantive result has yet been reached is a matter of concern, Mavroyiannis said that “it would be simplistic to think that Lute has an easy mission, adding that her mission started after the Conference on Cyprus in Crans-Montata ended without result and that it aims to get the negotiation back on track.

“It really takes a lot of work to achieve this and maybe more than we thought,” he pointed out.