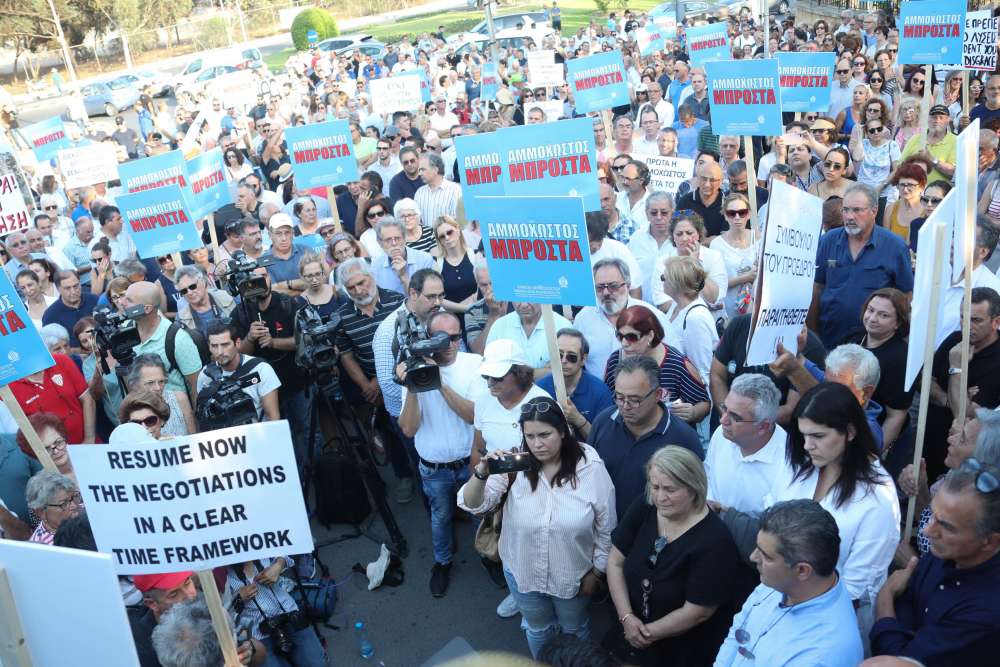 President Nicos Anastasiades has pledged to continue doing everything possible to achieve a Cyprus settlement and the return of the fenced-off section of the Turkish-occupied city of Famagusta to its citizens.
On Friday afternoon he received a Famagusta Municipality delegation, which handed over a petition, expressing concern about the possible opening of the fenced off area (Varosha) for Turkish settlement. It also expressed concerned about the island’s division.

People gathered outside the Presidential Palace, protesting plans pertaining to Famagusta, announced recently by Turkish Cypriot politicians. They asked the government to prioritize the return of the city to its owners.

Addressing the delegation, headed by Famagusta Mayor Alexis Galanos, President Anastasiades referred to a letter he sent on June 26 to Secretary-General Antonio Guterres about the Turkish-occupied city, and said that a similar letter will be sent to all EU leaders. The issue of Famagusta will be discussed on the sidelines of the forthcoming European Council, this Sunday, with President Anastasiades saying that threats to settle Famagusta will be an additional element in EU decisions to impose sanctions on Turkey.

Moreover, the President assured that a Cyprus solution remains a priority for the Greek Cypriot leadership and the Presidency of the Republic. He also referred to a previous proposal, to appoint a committee to take stock of the current situation in the fenced-off part of the city, with the aim being its return to its owners, a move which according to the President “will change the atmosphere entirely and will create favorable conditions for the resumption and the prospects of a new dialogue” for a Cyprus settlement.

During the meeting, Galanos read the petition which called on the government to protest to the UN the flagrant violation of relevant Security Council resolutions, providing for the return of the city to the United Nations and its lawful owners.

It also calls on the UN Secretary-General to work for the implementation of the relevant resolutions and asks the government to protest to the EU and all international fora the effort to extent Turkey’s invasion on the island.

Varosha is the fenced off section of the Turkish occupied town of Famagusta, described as a ‘ghost town’. UN Security Council resolution 550 (1984) considers any attempts to settle any part of Varosha by people other than its inhabitants as inadmissible and calls for the transfer of this area to the administration of the UN.

By In Cyprus
Previous articleNicosia expects UN to maintain position on Varosha based on Security Council decisions
Next articleMainly clear, with isolated showers, Met Office says