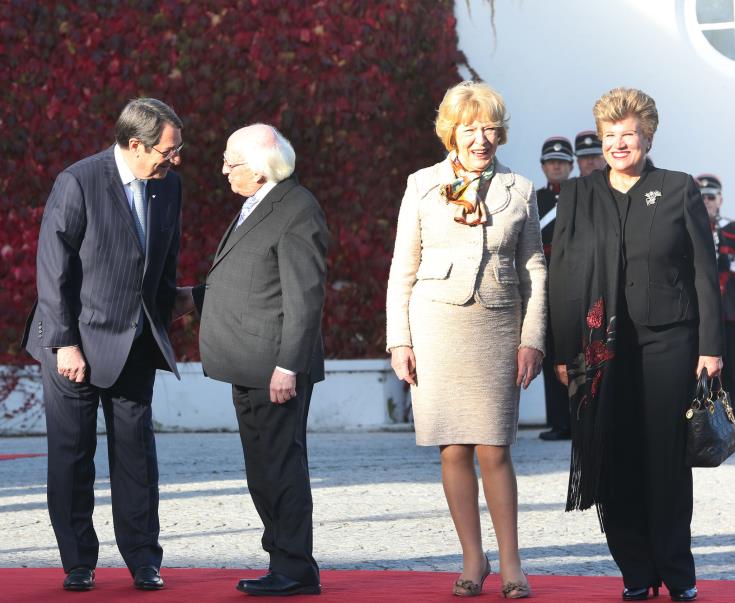 Cyprus Government Spokesman Prodromos Prodromou told the Cyprus News Agency (CNA) that during the talks that will take place at the Presidential Palace, President Anastasiades will raise the issue of Turkey`s provocations and illegal interventions in Cyprus’ Exclusive Economic Zone (EEZ)  and will brief his Irish counterpart about developments in the Cyprus problem. Moreover the bilateral relations between Cyprus will be discussed as well as developments in the EU, and more specifically Brexit.

The programme of the state visit, which comes after President Anastasiades’ state visit to Ireland in 2016, will also include visits to the buffer zone  and meetings with the UN Peacekeeping Force in Cyprus and the Committee on Missing Persons. President Higgins will also deliver an address to the House of Representatives.

A press release issued by the Irish side said that the state visit provides a timely opportunity to renew the longstanding bonds of friendship and solidarity between Ireland and Cyprus and to recognise Ireland’s UN peacekeeping contribution in Cyprus over many decades. Developing cultural and marine links will be highlighted, and President Higgins will take the opportunity to meet the resident Irish community.

The Irish President and Sabina Higgins will be accompanied on the visit by the Irish Minister for Justice and Equality, Charles Flanagan.

Higgins’ state visit to Cyprus will follow his visit, on 9-13 October, to Greece where he will have meetings with 12 other EU Heads of State and deliver the distinguished Aristotle Address.

Upon conclusion of the state visit to Cyprus, President Higgins will travel to Lebanon, for meetings with President Michel Aoun, meetings with Lebanese politicians and UN agencies, as well as a visit to Irish troops and Irish NGOs working in the country.