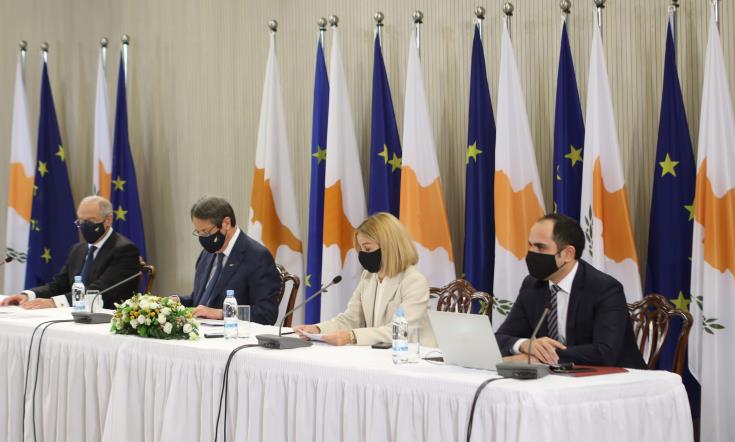 Rule of Law, transparency and accountability are the pillars for the fight against corruption, President Anastasiades has said, calling on everyone to show consensus and to work in unity in order for this huge attempt to yield results.

The President along with Justice and Public Order Minister Emily Yiolitis and the Deputy Spokesperson Panayiotis Sentonas presented on Friday the strategy and measures against corruption, following a televised message to the public on Thursday evening.

President Anastasiades said that the delay in the announcement of the measures was due to his will to consult with the political parties, NGOs, institutions and others, adding that he chaired three meetings in November and December 2020. He said that a series of issues such as the Cyprus problem, financial problems and the pandemic also contributed to the delay.

The President referred to actions to be taken such as prevention, education, awareness, the necessary legislative measures and risk monitoring and assessment.

He pointed out that the effective fight against corruption is not only the effort of the Government, but requires strong political will and cooperation of the legislature power, the political forces, institutions, NGOs, professional bodies and the wider civil society.

He also referred to the need for a strong and effective institutional framework and the respect towards institutions when carrying out their tasks. President Anastasiades also said that each one of us must demonstrate strict adherence to objectivity, impartiality and credibility.

He also spoke of the need for transparency in comprehensive investigations and added that the media should also observe the code of ethics. He noted that of course the press and the journalists must judge and criticize but while doing so they must be accurate.

Justice Minister Emily Yiolitis in her speech said that today the country makes a huge step in the fight against corruption and noted that this task is difficult and the utmost cooperation of all institutions and all political parties is needed in order to have success.

She referred to a number of reforms achieved so far in horizontal level , adding that a number of Ministries were involved to this end.

Some of these reforms include the enhancement of monitoring mechanisms of the Investigation Committees, various bills that have to do with the confiscation of illegal proceedings, the prohibition of entities to take part in public procurements if they have been prosecuted for illegal acts or unprofessional behavior, the bill for the transparency in the financial assets of government officials , the access of the public to governmental documents etc.

She also said that an internal regulation unit has been set up in the Police while steps were also taken to fight corruption in the sports sector. Yiolitis referred to the bill under discussion at the Parliament for an Independent Unit against Corruption and to the reform of the justice sector with the foundation of various Courts for the faster delivery of justice as well as the e-justice reform.

In her speech the Justice Minister also referred to the pillars of prevention, education, awareness, the necessary legislative measures and risk monitoring and assessment. These pillars were presented in more detail by Deputy Spokesperson Panayiotis Sentonas.

She said that a number of steps will be taken to implement these pillars and introduce them in the public life, the Ministries, local authorities, civil service etc. She said that the citizens will now be able to submit any information they have and any data , anonymously or not, for any persons who allegedly are involved in corruption cases.

By gavriella
Previous articleParody account: Search warrant of house is cancelled
Next articleGreeks and Austrians are hopeful about COVID-19 vaccine despite all concerns