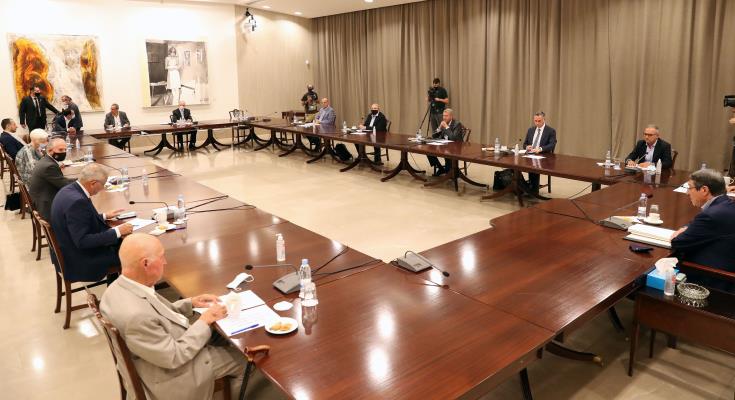 Cyprus President Nicos Anastasiades informed on Thursday the members of the National Council about the latest developments and the initiatives he has undertaken as regards the Cyprus problem, Deputy Government Spokesman Panayiotis Sentonas said in statements after the Council`s meeting.

Sentonas also noted thta the President suggested to the members of the Council that they escort thim to an informal Conference on Cyprus that the UN Secretary General, Antonio Guterres, is expected to convene, since this will be a crucial meeting for the Cyprus problem.

The Deputy Government Spokesman said that the President informed the National Council members about his meeting, earlier this week in Nicosia, with the UNSG`s special envoy Jane Holl Lute, who conveyed to him the UNSG`s decision to call for an informal five-party meeting on the Cyprus problem in New York.

Moreover he said that Anastasiades informed the members of the Council about the telephone conversaton he had with the UNSG on January 11, during which they discussed about the informal five-party meeting, the UNSG`s good offices mission report and the letter that the President has recently sent to Guterres.

The President also presented the proposals which he conveyed to the UNSG, responding to his call for concrete Confidence Building Measures (CBMs) which facilitate the resumption of the negotiations, Sentonas noted.

He went on to say that after the update by President Anastasiades, a thorough discussion took place during which the members of the National Council outlined their views and proposals.

Sentonas said that the President suggested to the members of the Council to escort him to the informal five-party meeting “since this is a crucial meeting for the Cyprus problem.”

He noted  that this issue will be discussed at a later stage as well when, the UNSG will determine the date that the conference will take place.