President in favor of supporting struggling member states through fund 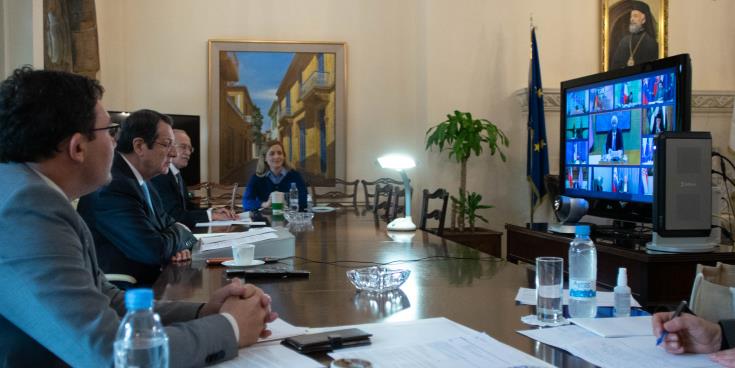 Member states facing serious problems due to the pandemic should be supported through EU funds, President of Cyprus Nicos Anastasiades told a European Council meeting on Thursday.

During a video conference with EU leaders, President Anastasiades also informed them about Turkey’s recent provocative actions in Cyprus’ exclusive economic zone and continental shelf, and underlined the importance of adhering to a consistent and joint principled position, in line with the decisions taken by the European Council.

According to a written statement by Government Spokesman Kyriacos Koushos, President Anastasiades attended early on Thursday afternoon the European Council summit, via video conference. The agenda focused primarily on ways to deal with the COVID-19 pandemic and efforts for a joint EU recovery plan, in light of the proposals put forward by Eurogroup. The EU Multiannual Financial Framework for 2021-2027 is also being discussed.

“In his intervention, President Anastasiades spoke at length about Cyprus’ position on the recovery plan, underlining that irrespective of the tools that will be chosen, what matters is to help primarily countries that are more exposed, due to their service-based economy that has been severely affected by the economic crisis, as is the case of Cyprus. He stressed that particularities should be taken into account, such as the fact that Cyprus is an island, and the geographic location in general, and strengthen both the Cohesion Policy, as well as the Common Agricultural Policy. Cyprus was also in favor of strengthening countries that face serious problems through EU funds and not through loans, and was in favour of continuing the discussion for a mutualized debt mechanism” the Spokesman said.

According to Koushos, the President of the Republic also informed EU leaders in length about the new provocative actions of Turkey in the EEZ and continental shelf of Cyprus. “He noted that while in the midst of a global pandemic, with countries called to cooperate and display real solidarity, Ankara continues its hostile and dangerous approach, that turns against international law as well as against EU principles, values and interests, in the framework of an anachronistic revisionist policy in the Eastern Mediterranean” the Spokesman added.

He said finally that President Anastasiades stressed the importance of the EU continuing to adhere to a consistent, joint principled position on this particular issue, in line with decisions already taken by the European Council and mechanisms already in place.