President: If the UN Secretary General wishes, he could send a personal envoy to try resume the stalled peace talks 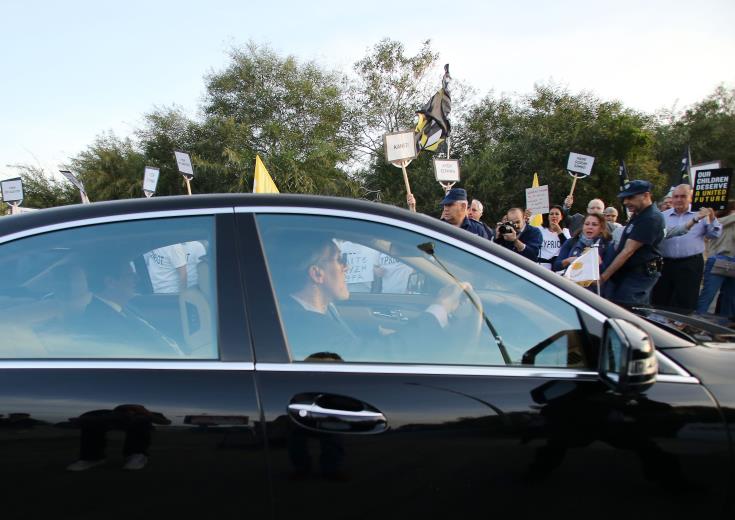 Cyprus President Nicos Anastasiades has not ruled out the possibility of a personal envoy of the UN Secretary General trying to look into the chances of resuming the stalled peace talks.

Speaking to the press after a two-hour long tete a tete meeting with the Turkish Cypriot leader, Mustafa Akinci, the President also said that they had a frank and calm discussion, during which they talked about the problems they are faced with and the prospects of a new dialogue.

“We established the disagreements that exist,” he noted.

The President said that he reiterated his readiness to begin negotiations from the point at which the talks ended in July last year in Crans Montana, in Switzerland.

Invited to say whether both sides agreed not to object to the appointment of personal envoy of the UNSG, or proceed as he described earlier, in the sense that there would be a process of sounding out the positions of the two sides, he said, ‘this is not ruled out’.

Asked if there will be a period of preparation or stagnation, he said this depends on the UNSG if and whether he will decide to send an envoy for a fact finding mission.

Invited to say if there was a common ground at the meeting, he said, `if you consider common ground the ascertainment that both sides insist on their positions..`

The President was asked if the Turkish Cypriot leader insisted on setting up a bicommunal committee to deal with matters relating to the exploration and exploitation of Cyprus` natural gas. He said that Akinci raised the issue but knew a priori his position, namely that this is not an issue of discussion, nor is the postponement of Cyprus’ energy program on the table.

The President was also asked if he raised the issue of Turkish provocations in Cyprus’ Exclusive Economic Zone. He replied that ‘everything has been raised and discussed.”

Asked if they discussed about the issue of governance, he said that they referred to existing differences, whether each side insists on its positions, but there was no detailed discussion.

Regarding the opening of more crossing points, to facilitate movement to and from the island`s northern Turkish occupied areas, he noted that they said during the meeting that by the 1st of July the Derynia crossing point will probably be delivered and the Lefka-Apliki crossing point by mid September.

Repeated UN-led round of negotiations have yet to lead to an agreement which would reunite Cyprus, divided since the 1974 Turkish invasion, under a federal roof.