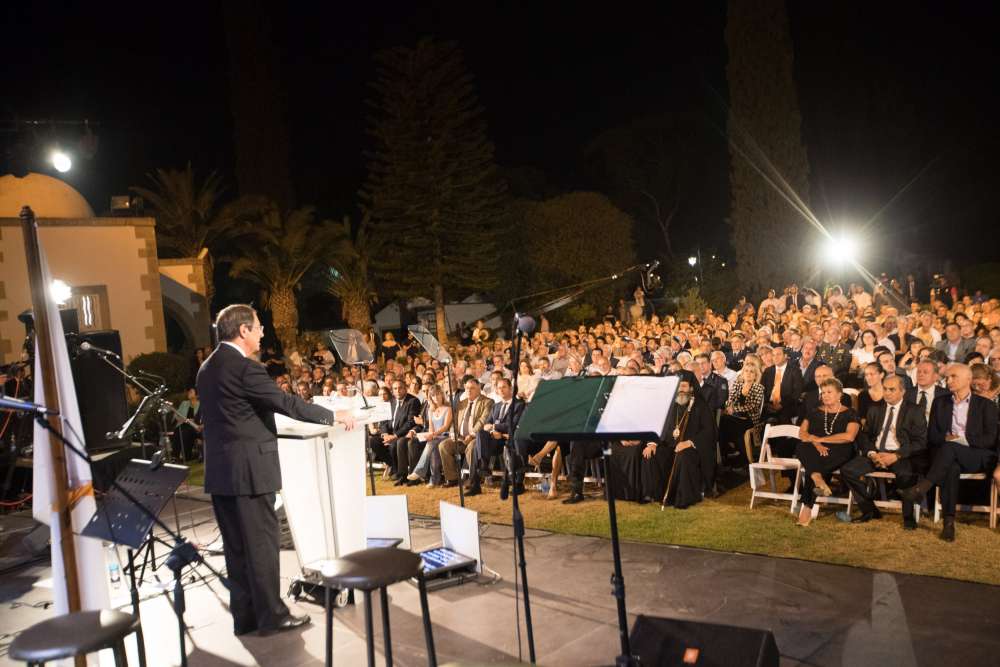 President of the Republic Nicos Anastasiades reiterated his determination to engage in a dialogue on a Cyprus settlement on the basis of the parameters as determined by the UN Secretary General on 30 June 2017 and clarified on 4 July.

At the same time he expressed the hope that the meetings UN Envoy Jane Hall Lute will hold on the island on Monday, will allow UN Secretary General Antonio Guterres to start a new round of peace talks.

Lute arrives in Cyprus tomorrow and on Monday will hold separate meetings with President Anastasiades and Turkish Cypriot leader Mustafa Akinci. She is then set to visit Athens, London and Ankara before returning to New York to brief UNSG.

Speaking on Friday evening at a event at the Presidential Palace,  to mark the 44th anniversary of the 1974 Turkish invasion, the President expressed the hope that Turkey and the Turkish Cypriots would meet the new perspective positively and take into account all the parameters set during the Crans-Montana Conference last July and not just some of them.

He also said that there are significant remaining differences, but they can be bridged by the implementation of the European acquis.

The President said that Turkey, for more than four decades, displays an intransigent and unacceptable stance, citing that seizure of property, violation of human rights, settlements and the presence of Turkish troops are all supposedly because our Turkish Cypriot compatriots feel unsafe.

He added that Ankara deliberately ignores the fact that Greek Cypriot community accepted the bizonal, bicommunal federation with political equality, following a difficult compromise, while at the same time Turkey disregards the EU acquis and international law.

President Anastasiades also said that he is ‘sorry’ for this pretext Turkey is using, as it is in complete opposition to what was agreed during the talks in Crans Montana, namely that the security of one community could not come at the expense of the other.

The President pointed out that a member state of the UN and the EU cannot be considered independent and sovereign if it is subject to anachronistic guarantees and intervention rights of any third country.

Responding to claims by the Turkish Cypriot leader that the Greek Cypriot community sees itself as the only ‘landlord’ of the island, the President said that we respect our Turkish Cypriot compatriots and we have proved it through the acceptance of political equality and their participation in the governance, however he noted that we cannot accept provisions that would equate to numerical equality in governance or that would create a state where one community would enjoy benefits that ultimately would lead to a non viable solution.

Cyprus remains divided since the 1974 Turkish invasion of the island. Numerous UN-backed talks, aiming at reunifying the island under a federal roof, failed to yield any results. The latest round of peace talks took place last July at the Swiss resort of Crans Montana but ended inconclusively.