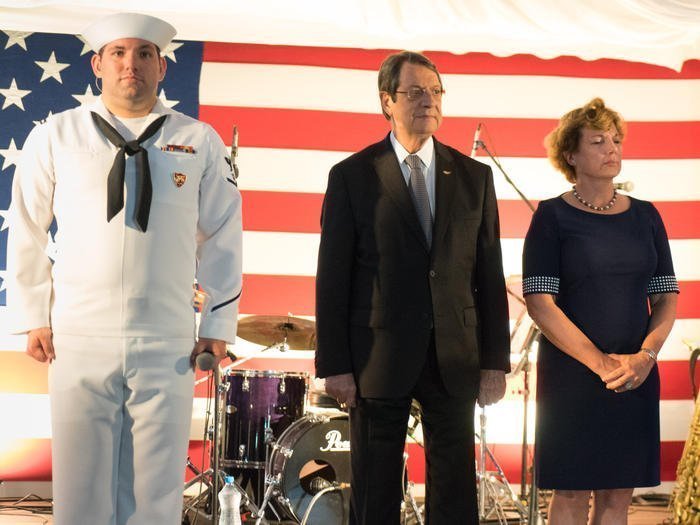 President Nicos Anastasiades has expressed the hope that it would be possible following the Turkish elections on June 24, for a special envoy of the UN Secretary-General to explore through consultations with all stakeholders the creation of the conditions allowing for the resumption of Cyprus reunification talks.

“In this respect, it is my strong belief that the United States of America, as a Permanent Member of the Security Council, has an essential role to assume when the negotiations resume, particularly in relation to the external dimensions of the Cyprus problem,” he stressed.

President Anastasiades who was addressing a reception for the 242nd Anniversary of Independence of the United States of America in Nicosia said his most important priority “cannot be other than ending the unacceptable current state of affairs.”

“We aspire to achieve lasting peace and reunite Cyprus free from any foreign dependencies through a comprehensive settlement that will in fact embody the Declaration’s most famous sentence: ‘……all men are created equal, that they are endowed by their Creator with certain unalienable Rights, that among these are Life, Liberty and the pursuit of Happiness’”, he stressed.

‘’Regrettably’’, President Anastasiades said, “last year’s Conference on Cyprus in Crans Montana did not yield the long-expected positive results, due to Turkey’s insistence on its longstanding position to retain the right to unilaterally intervene in Cyprus through the continuation of the anachronistic system of guarantees and the permanent presence of Turkish troops.”

“As I have stated many times to the UN Secretary-General and the international community in general, I remain strongly committed to negotiate a solution within the six-point framework that the Secretary–General has set as a basis for discussions, the relevant UN resolutions and the EU values and principles,” the Cypriot President stressed.

He further expressed the hope “that it would be possible, following the Turkish elections of June 24th, for a special envoy of the Secretary – General to explore, through consultations with all interested stakeholders and relevant parties, if the necessary conditions that will allow the resumption of the dialogue are in place.”

“On our own behalf, despite any recent unfounded rumours, our aim and end-goal remains one and only: To reach a viable and functional settlement, fully in line with international and EU law, that will reunite Cyprus in a modern, truly independent and sovereign state, free of any third country dependencies and which will fully embody common prosperity and peaceful co-existence for all its citizens,” he assured.

At the same time, he took the opportunity to express his appreciation for the US’ “principled stance on the Cyprus Problem and your unwavering support on our efforts to reach a lasting and comprehensive solution.”

“I would also like to personally thank you Ambassador Doherty for your sincere interest and expressed commitment to a fair and enduring settlement,” he said.

“In this respect, it is my strong belief that the United States of America, as a Permanent Member of the Security Council, has an essential role to assume when the negotiations resume, particularly in relation to the external dimensions of the Cyprus problem,” he noted.

Referring to his government’s goal to enhance relations with the US, he said, “I am pleased to assess that our partnership has evolved into one of strategic depth, particularly when dealing with issues of global concern, both bilaterally and multilaterally.”

He said that “a bilateral US – Cyprus dialogue is in progress in order to address many issues of economic co-operation, particularly as regards US investments in Cyprus.”

President Anastasiades also singled out cooperation with the US in the field of energy.

“As I have stated many times in the past, we warmly welcome and express our deep appreciation for the presence and involvement of American companies – Noble and now through the energy giant Exxon-Mobil – in Cyprus’ exclusive economic zone for the exploration and exploitation of hydrocarbon reserves,” he said.

President Anastasiades expressed his conviction that “the above also serves our joint vision of transforming the Eastern Mediterranean into an energy hub that would contribute to the region’s stability, through among others, the diversification of energy sources and routes.”

On her part Ambassador Doherty referred in her address in key messages conveyed by Martin Luther King Jr.

“The challenge for all of us, wherever we live, is to combat prejudice, heal divisions and dream up a better future,” she said.
For Cyprus, Doherty noted, “that means all of us working together to create this future.”

“It remains the hope of the United States, and my hope, that Cyprus will be unified as a bi-zonal, bi-communal, federation,” she stressed, adding that “a unified island would offer a prosperous future for all Cypriots.”

“I know it is difficult these days to be hopeful.  However, we need to maintain courage – and keep trying,” she pointed out.

“Looking at the region, we see the Republic of Cyprus as our strategic partner.  In the past four months, we have had visits of a Rear Admiral of the U.S. Navy and top officials from the Departments of State, Treasury, and Defence,” she said, adding that “few countries in Europe have had a similar level of US engagement.”

She continued pointing out that “we are helping to maintain peace.  Over the past five decades, we have contributed nearly one billion dollars to UNFICYP in real terms.”

“We are providing counter-terrorism, counter-narcotics, anti-money laundering and cyber security training for Cypriot officials,” Doherty said, adding that “the US Navy actively participates in bilateral and multilateral search-and-rescue exercises.”

“To help Cypriots know the fate of family members, we have donated nearly one million dollars to the Committee on Missing Persons since its inception.  We have invested in community-based organisations that improve daily life.  One of them, the Bone Marrow Donor Registry, is now a global databank, saving lives on the island, in the region, and in the United States,” she stressed.