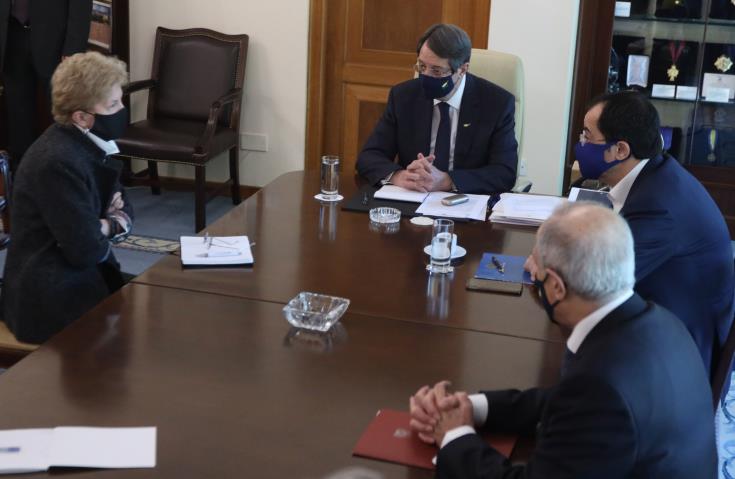 Cyprus President Nicos Anastasiades has expressed to Jane Holl Lute, UN Secretary General`s Special Envoy on the Cyprus problem his readiness to take part in an informal five-party conference in the context of a letter the UNSG sent on October 26, Government Spokesperson Kyriacos Koushos has said, announcing that a National Council, the country`s top advisory body, would be convened on January 14.

In a statement issued following a two-hour meeting President Anastasiades had with Lute at the Presidential Palace, Koushos -said the meeting was constructive in relation to convening an informal five-party meeting under the aegis of UN Secretary General and said the President “expressed his readiness to take part in the informal five-party meeting in the context of the UN SG`s letter, dated October, 2020.”

Koushos also said that President Anastasiades expressed his wish that the informal conference would lead to a substantial resumption of talks, which will aim to reach a solution of the Cyprus problem within the agreed framework.

The Government Spokesperson stressed the importance of promoting concrete confidence building measures, as was the UN Secretary General`s request, which will create the appropriate climate and prospects to achieve the goal of a Cyprus solution.

He added that President Anastasiades noted that unilateral actions are not conducive in creating the appropriate climate nor to they help in the successful outcome of a new dialogue.

According to Koushos, Lute briefed President Anastasiades on the UN Secretary General`s intention to convent an informal five-party conference within February 2021.

He also announced that the President has convened a meeting of the National Council on Thursday, January 14, at 1100 hours local time, during which he will brief political party leaders on his meeting with Lute.

By gavriella
Previous articleAll available appointments for vaccinations ran out
Next articleVehicle registration in Cyprus drops by 16.1% in 2020