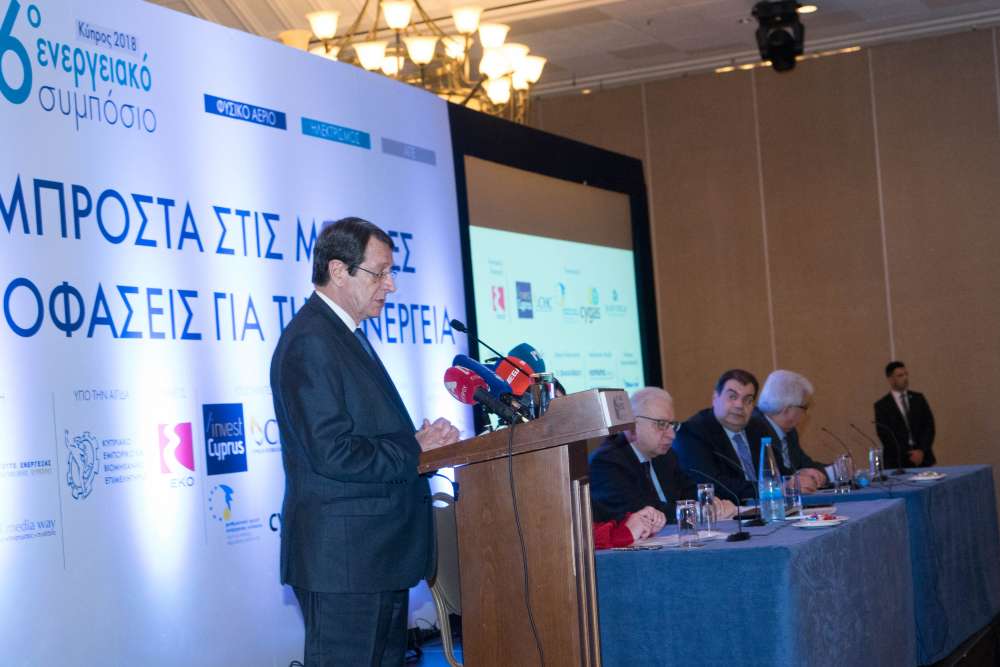 President Nicos Anastasiades has said that he expects that the USA will express in practice its interest to also take part in the tripartite cooperation between Greece, Cyprus and Israel.

President Anastasiades, who was addressing, here today, the 6th Energy Symposium, entitled “Faced with great decisions on energy”, said that cooperation mechanisms with countries from the region have proven to be particularly successful with significant benefits for the participating countries.

This he said has resulted in other EU countries expressing interest to take part and to further extend them.

“I attribute particular importance in the interest shown on the part of the USA to take part in the trilateral (cooperation mechanism) between Greece, Cyprus and Israel,” he noted, adding that “I expect that soon this will be confirmed in practice.”

At the same time, President Anastasiades pointed out, France has also shown an interest in taking part in the trilateral cooperation mechanism between Greece, Cyprus and Egypt.

Within January, he continued, a summit between the seven Mediterranean countries of the EU is expected to convene in January in Nicosia, a development which will showcase the role Cyprus can play as a pillar of stability and peace in the region.

The President also sent a message to Turkey that the country should have the necessary constructive stand in line with international law in order to also take part in the wider regional cooperation. He noted that Cyprus’ cooperation with neighbouring countries is not directed against anyone. He also said that the wealth found within Cyprus’ Exclusive Economic Zone (EEZ) belongs to all its legitimate residents.

President Anastasiades further expressed “the hope that Turkey will finally adopt the necessary constructive and realistic stand which befits 21st century requirements and is in absolute line with international law,” and the key principle that every sovereign state should be completely independent to take any decisions, in the hope that that it will become part of the wider energy collaboration and plans in our region.

He also said that he has reiterated many a time and that it has also been stated in all trilateral summits that their “goal is cooperation of everyone in the wider region and not the isolation of anyone.”

Anastasiades also wondered why there should be any differences with Turkey, if a solution is reached which will be in the interest of all Cypriots.

“Why couldn’t Turkey be part of the cooperation? Why shouldn’t it be part of developments on energy matters, since it will also benefit from the wealth in the region, which, I reiterate, concerning Cyprus’ EEZ belongs to all legitimate residents of the Republic of Cyprus?” he asked.

This is the kind of peaceful and stable environment we are obligated to build together in order to achieve a mutually beneficial exploitation of the Eastern Mediterranean’s hydrocarbons, he added.

President Anastasiades also referred to the UN Convention on the Law of the Sea of 1982, pointing out that it is the international law Cyprus abides by but certain countries for reasons of their own have not ratified it.

ExxonMobil has been awarded, together with Qatar Petroleum the exploration licence in block 10 of Cyprus’ EEZ.

The Navtex is valid until February 25, 2019. A safety zone of 500 metres is established around Stena IceMax and entering this area is prohibited for any reason.