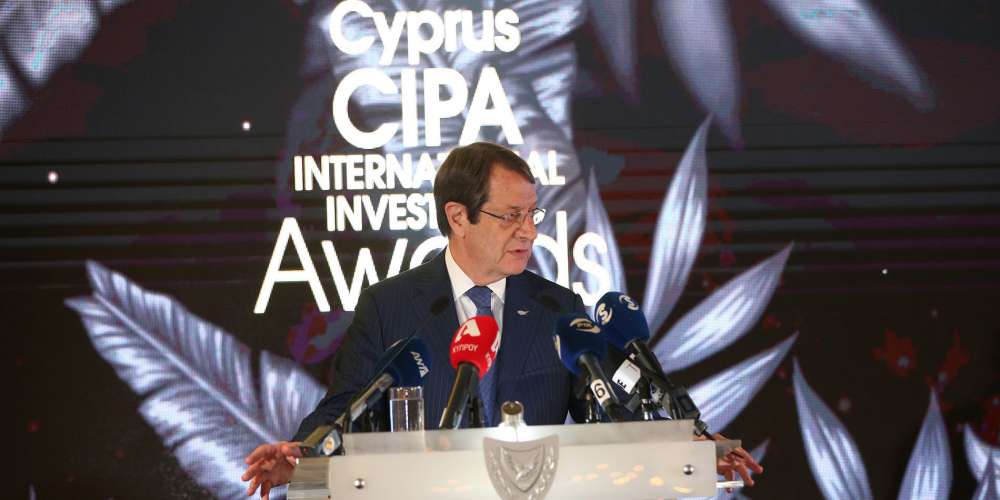 President Nicos Anastasiades has assured that the government’s plan is to continuously improve the country’s business environment so as to reinforce the position of Cyprus as a competitive, innovative, stable and fully transparent destination for business and investment.

Addressing the 7th Invest Cyprus International Investment awards, the President expressed his gratitude to the investors for their vote of confidence and trust for their ongoing support and determination to develop their businesses in Cyprus.

“In this respect we recognised the importance of maintaining sound public finances, of preserving a stable and competitive tax regime, and of providing incentives for new business and investment,” he said.

He also said that the government’s goal is to solidify the conditions for sustainable growth in a mid and long-term horizon, in favour of all citizens and within conditions of full employment.

The President referred to the measures that the Government is taking to improve areas important for any investor and in particular as regards creating a business-friendly environment. As he said the government’s aim was to reform the public service so that it facilitates growth in a modern, knowledge-based, scientific, high-tech and innovative economy.

“Moreover, it goes without saying that we will continue promoting transparency and demonstrating zero tolerance to any kind of mentality that could evoke phenomena of corruption or inexcusable delays in business-related processes,” he added.

He further  expressed hope that the House of Representatives would approve a series of reform bills the Government submitted or intends to submit, such as the one for the establishment of an Under-Secretary for Tourism and the other one for establishing a comprehensive legal framework for Growth and Competitiveness.

“At the same time, we shall remain committed to our balanced budget policy which has been successful in upgrading our economy’s credit rating and establishing higher levels of confidence by the international investment community”, he added.

Regarding the local banking system, he said that Cypriot financial institutions have been very diligent in advancing their corporate governance policies and have vigorously stepped up their efforts to combat money laundering phenomena.

Invest Cyprus Chairman, Michalis Michael said that under the guidance of the Government and the President himself, and the invaluable contribution of the private sector, the organization has been implementing a targeted strategy in the framework of which they  had set specific targets and mobilised innovative tools to enhance investment interest in the country.

“An ambitious reform strategy, as well as a series of targeted initiatives in selected markets and business audiences allowed us to stimulate investment interest in new and existing projects and sectors, while capitalising on the opportunities created by international developments”, he said.

The winners of this year`s awards were Olympia Group, ExxonMobil, DP World, Unitedam Marine Limited, Eurobank and Arab Satellite Communications Organization (Arabsat). An Honorary Prize for its Greater Contribution to the Cyprus Economy was awarded to the Council of Europe Development Bank.