President: Crucial to reach solution that will bring peace and security across Cyprus 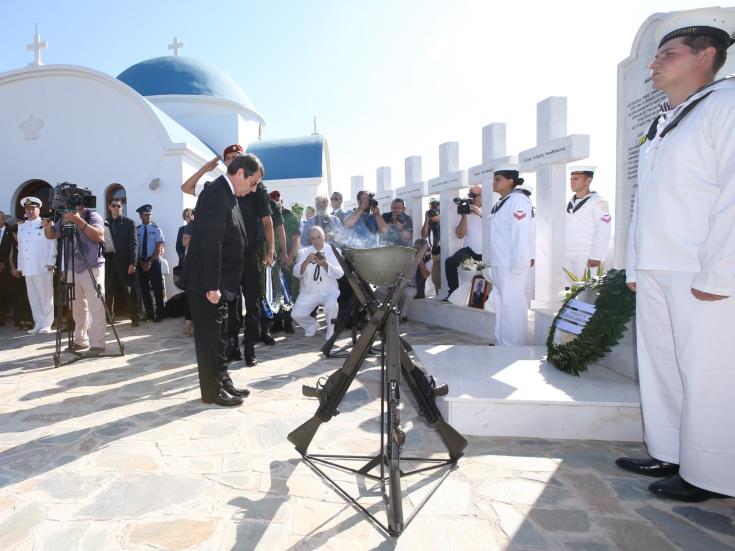 It is crucial to reach a solution of the Cyprus problem which will bring peace and security across the entire country and create conditions of cooperation and prosperity for all its citizens, President Nicos Anastasiades has said, addressing a memorial service at the naval base “Evangelos Florakis”, on the southern coast, to honour thirteen people killed in a huge blast on July 11, 2011.

The blast occurred when a number of containers, full of munitions, which Cyprus had confiscated from “Monchegorsk” vessel sailing from Iran to Syria in 2009, exploded.

Thirteen people died and more than 60 people were injured during the explosion.

As a result of the explosion and the shock wave that followed, the nearby Vassiliko power station, the main one in the island, suffered extensive damage leading to power cuts for some time after the blast.

Addressing today’s event President Anastasiades said that the greatest honour those killed deserve is to reach an “honest solution which will rid us of the consequences of the 1974 Turkish invasion, which constitutes the darkest hour in our recent history.”

“This is why it is crucial for us to reach a solution bringing peace and security across the country and creating conditions of cooperation and prosperity for all its citizens,” the President added.

The solution, he continued, will be fully compatible with Cyprus’ status as an EU member state, something which will guarantee the functionality and sustainability creating conditions of peaceful coexistence and co-creation.

President Anastasiades expressed hope that during negotiations, which should take place without any threats or blackmail, it will be possible to create those conditions which would allow such proposals to be put forward that will fully respect the reasonable concerns and sensitivities of both communities while not ignoring international law and the European acquis.

Moreover he reiterated the promise to make an effort so that mistakes such as the one which led to the blast will never be repeated again.

By In Cyprus
Previous articleNo taxes for sales of mortgaged real estate
Next articleCCB deal set to change Hellenic and its future potential, CEO tells AGM