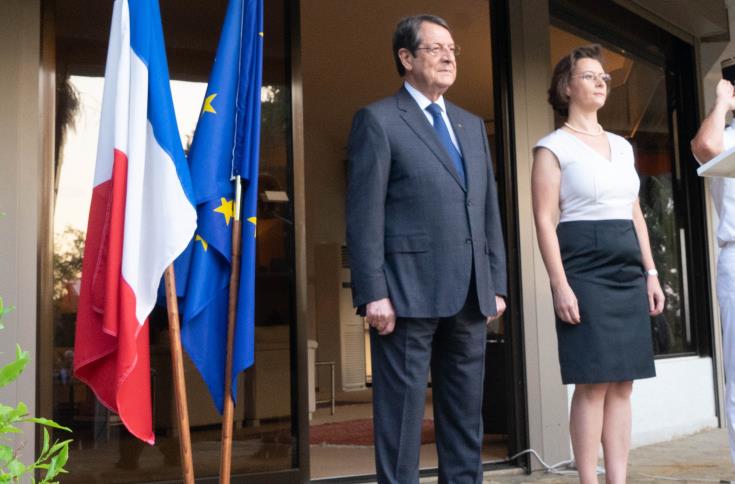 In a period of immense challenges and illegal actions, the presence of the French naval force in the broader geographical region tangibly proves the readiness and determination of France to act as a pillar of stability in the region, while it sends a clear message to those who aim at escalating tensions by acting in an unacceptable way, Cyprus President Nicos Anastasiades has said.

Speaking on Monday evening during a reception hosted by the Embassy of the Republic of France in Cyprus, on the occasion of the National Day of France, the President said that the participation of the French multinational company TOTAL in the energy programme of Cyprus and its active involvement in the Cypriot EEZ has undoubtedly opened new horizons of cooperation as regards the Energy issues to the benefit of the European Union’s energy security.

The President said that the actions of Turkey have been condemned in the most intense way by the European partners and the international community and do not abide by the concept of the good neighbourhood relations, the international law and more specifically the UN Convention for the Law of the Sea (UNCLOS).

Anastasiades expressed Cyprus’ gratitude for the longstanding position of principles of France as regards the Cyprus problem and its support to the tireless efforts to reunite Cyprus.

He noted that this support is expressed through the increased interest and the expressed will of France to constructively contribute to a Cyprus settlement, especially with regard to the international aspect and the safeguarding and guaranteeing of the implementation of the solution.

He assured that despite the ongoing stalemate, “our sole concern and absolute priority continues to be to create those condition that will allow the resumption of the talks under the UN Secretary General’s auspices from the point they were suspended.”

Anastasiades said that a new conference on Cyprus would require the lifting of Turkey’s illegal activities both on the ground and at the sea.

He reiterated the need for a viable and functional settlement that will terminate the unacceptable status quo, on the basis of the relevant UN resolutions, the international law and the values of the EU, of which the Republic of Cyprus is  a member state, that will secure the sovereignty, the independence and the territorial integrity of the Republic of Cyprus, with no interventions, occupation troops and guarantees by third countries.

Referring to the bilateral relations between Cyprus and France, the President said that an indication of the fact that they are excellent is, among others, their cooperation in the field of education, which is tangibly proven by the fully successful operation of the French-Cypriot school in Nicosia.

He also noted that as of August 1, four flights will be conducted from Larnaca airport to Paris and vice versa, terminating the paradox of not having direct flights between the two countries.

The President said that Cyprus and France share the same concerns for the current developments and the asymmetrical threats in the Mediterranean and the Middle East and the same vision for peace, security and stability in the region, having the international law as their compass.

He also noted that both countries participate in the MED-7 group, noting that participating countries have identical views in plenty of issues that concern Europe and others.

Anastasiades said that France has always been a strategic partner of Cyprus and that himself and the government have the clear political will to further enhance and extend the already excellent relations between Cyprus and France, at the bilateral, European and multilateral level.

Moreover he referred to the COVID-19 crisis, congratulating French President Emmanuel Macron and German Chancellor Angela Merkel for the initiatives they have undertaken so that the EU can respond to the current and future challenges.

By In Cyprus
Previous articleLimasol: 2 years jail for break-in
Next articleBelgium, once hard-hit, reports zero coronavirus deaths for first time since March