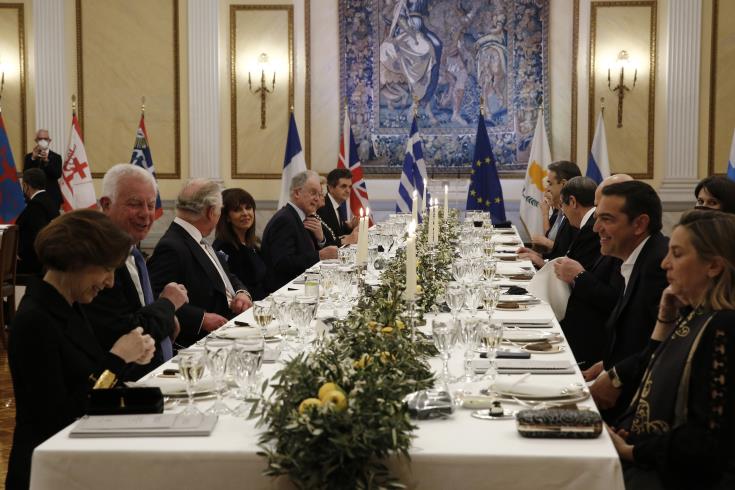 Cyprus President Nicos Anastasiades attended on Wednesday evening an honorary dinner, hosted by the President of the Hellenic Republic Katerina Sakellaropoulou to mark the celebrations of the 200th anniversary of the Greek Revolution of 1821.

During his speech, President Anastasiades noted that the fight for freedom against the Ottoman rule constituted a heroic struggle of Hellenism, the epitome of which is the cry “Freedom or Death”.  As he said, this historic cry constitutes the foundation of the modern Greek state and expresses the history of modern Hellenism.

President Anastasiades said that the ideal of freedom unified the Greek population to fight against the far more populous Ottoman Empire, by launching the heroic Revolution that “led the Great Powers to change their stance –in contrast to the policy of the Holly Alliance that was dominant at that time– and to cooperate in the Greeks` struggle”.

“We must acknowledge the important role that Britain, France, and Russia, played during the Revolution, especially at the battle of Navarino, during which the Great Powers’ intervention signalled the establishment of the Greek state and the liberation of Greece”, Anastasiades stressed.

The President of the Republic of Cyprus noted that the greatness of the Greek Revolution “constitutes a guide for own path and will continue to inspire our vision for the survival of Hellenism and the abolition of military troops from Cyprus.”

The Greek Revolution constitutes the noblest and important moment of modern Greek history, allowing Greece to become a modern and democratic state, an integral part of Europe, and a co-founder of global peace, Anastasiades said. This legacy fuelled Greece’s progress and continues to make the country an example for the people of the world, he concluded.