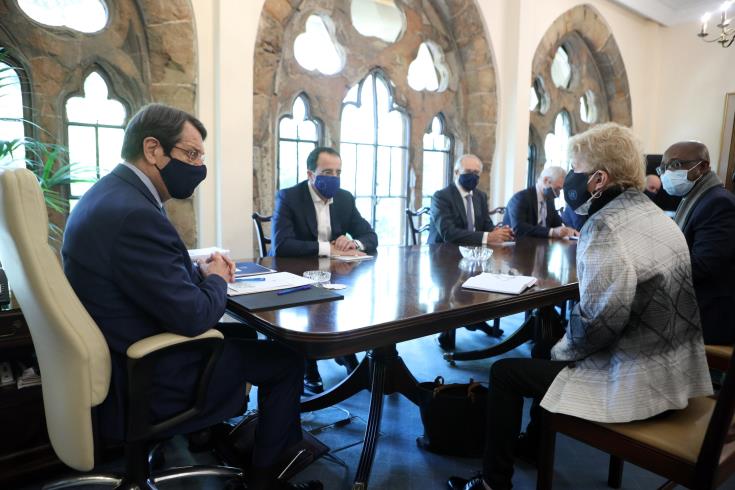 Cyprus President expressed on Monday to the UN Secretary – General`s Special Envoy on Cyprus, Jane Holl Lute, his determination to attend the informal meeting on the Cyprus problem in a creative way and assured  her of his absolute political will to cooperate with a view to achieve a functional, lasting and viable solution to the Cyprus problem, so that the Republic of Cyprus will evolve to a bizonal, bicommunal federation.

On her part, Lute informed Anastasiades that she will later on visit Athens for meetings, and that she will also have contacts with the British Foreign Office.

Government Spokesperson, Kyriacos Koushos, said in a written statement that President Anastasiades assured of his absolute political will to cooperate with a view to achieve a functional, lasting and viable solution to the Cyprus problem, on the basis of the UN Security Council decisions and resolutions, the joint statement of November 25, 2019, in Berlin, the High-Level Agreements on the Cyprus problem, the work and the convergences concluded so far, as well as the EU principles and values, so that the Republic of Cyprus will evolve to a bizonal, bicommunal federation.

Moreover, according to Koushos, the President underlined, once again, the position of the Greek Cypriot side that the presence of the EU as an observer to the conference on Cyprus is to the benefit of everyone of Cyprus, as an EU member state, and in view of the recent statements by the Turkish government, about the positive agenda it wishes to have with the EU.

On her part, Lute informed President Anastasiades that she will have later today a meeting with the Turkish Cypriot leader Ersin Tatar, while she will later on visit Athens for meetings. Moreover she noted that she will also have contacts with the British Foreign Office, Koushos noted.

The meeting took place in the framework of the preparations for the informal meeting on Cyprus which the UN Secretary-General has convened and which will take place in Geneva on April 27-29.