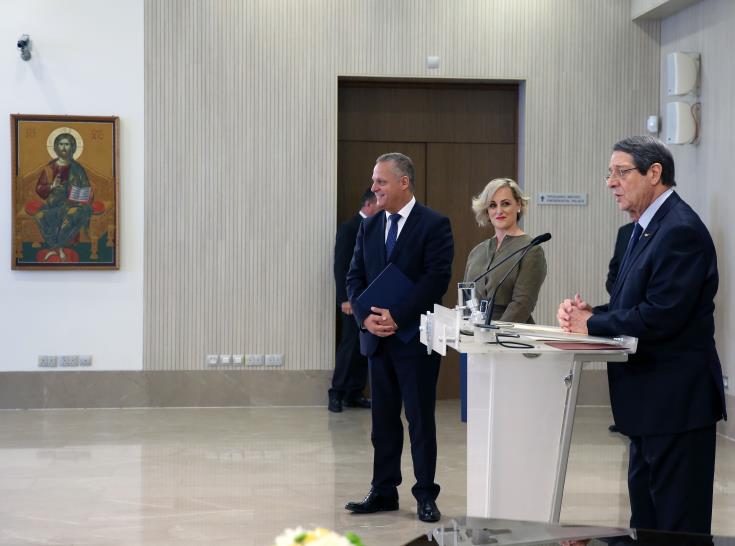 President Nicos Anastasiades attended on Wednesday a ceremony for the appointment of new Environment Commissioner Klelia Vasiliou and new Commissioner for the Development of Mountain Regions Costas Hambiaouris, asking them to cooperate closely with the rest of the government. Vasiliou served previously as Deputy Government Spokeswoman, while Hambiaouris  was the Minister of Education until the recent government reshuffle.

“I will be by your side, along with all Ministers” the President assured the two Commissioners at the ceremony, at the Presidential Palace, attended by Cabinet Ministers, state officials and several community council presidents.

Cooperation is essential in order to implement government decisions taken at the Ministerial level, but also in order for Commissioners to make their suggestions heard by the Ministries, the President added.

He said moreover that both offices are of crucial importance for the protection of the environment and in order to face modern challenges, while devising a strategy for the sustainable development of mountain regions.

The President also referred to EU warnings concerning the protection of the environment and the environmental impact of various developments projects on the island. “There is a lot that needs to be done in relation to the environment” he said, adding that the Environment Commissioner and the Ministry of Agriculture will coordinate action in order to handle the issues raised by the European Commission.

“There are no enemies of the environment” Vasiliou said in her speech, adding that some people need to understand that environmental protection is not a hindrance to growth and that development is no enemy to the environment.

Hambiaouris thanked the President for his appointment and praised the work of his predecessor, Yiannakis Papadouris, who resigned recently. He said that he will make every effort to successfully and adequately perform his new duties.

Klelia Vasiliou succeeds Ioanna Panayiotou, who served as Environment Commissioner for the past seven years. Speaking later at the handover ceremony, Panayiotou said that she worked hard and consistently to further environmental protection and citizens’ health and quality of life issues. As Hambiaouris explained, Papadouris did not attend the handover ceremony as he was abroad.