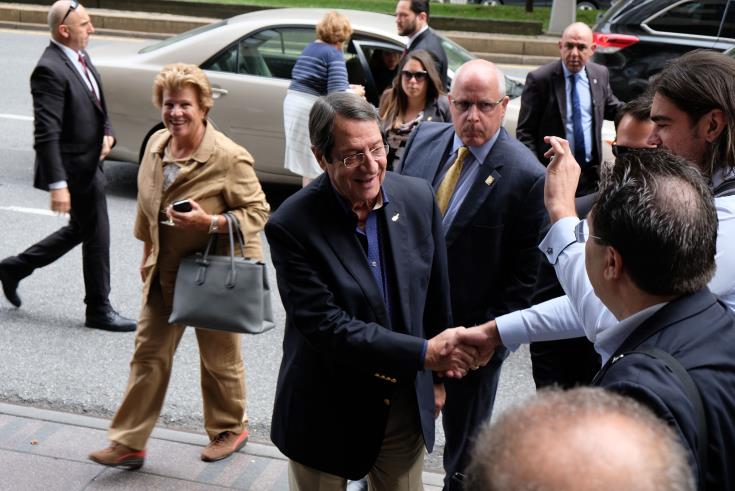 President Nicos Anastasiades underlined on Saturday his determination and willingness to work for the resumption of Cyprus talks.

Speaking to the press after arriving in New York, where he is attending the 73d session of the UN General Assembly, President Anastasiades said that this year’s session is of particular interest, given the inactivity in Cyprus’ settlement talks.

He also referred to the initiatives anticipated from the part of the UN Secretary-General, in case Antonio Guterres deems that the resumption of talks is possible – either in the form of bicommunal talks or a new Conference – on the basis of the report of his special envoy Jane Holl Lute or the scheduled meeting between the two men on September 28th.

“Our position is well-known, we are determined and we also have the will in order for talks to resume – after there has been a preparation to avoid a new failure – at a new Conference from where we were left off on the basis of the Guterres framework” he underlined.

He explained that his reference to the need for preparation had to do with the withdrawal of the map, which was submitted by the Turkish Cypriot side in January 2017 as a prerequisite to start talks in Geneva.

The President added that preparation was also necessary in relation to Turkey’s intentions vis-à-vis the chapter of security, which includes the abolition of intervention rights and the withdrawal of Turkish occupation troops. What we are aiming at is a normal state, as the Secretary General so eloquently put it, he added.

The President is accompanied in New York by the First Lady Andri Anastasiades, Foreign Minister Nicos Christodoulides, Government Spokesman Prodromos Prodromou, Undersecretary to the President Vassilis Palmas and other officials.

He referred to the meetings he and the Foreign Minister are having during the week of the UN General Assembly and noted that more meetings will be conducted by the Minister of Finance Harris Georgiades and Energy Minister Yiorgos Lakkotrypis, who are arriving next week together with Deputy Minister of Shipping Natasa Pilides for the 2nd Capital Link Invest in Cyprus forum.

He also announced that Foreign Minister Nicos Chirstodoulides is meeting with US Secretary of State Mike Pompeo in October.

Moreover, he said that while in New York, his contacts include the five Permanent Members of the Security Council, Jewish-American organisations, as well as Archbishop Demetrios of America and others, in the framework of Cyprus’ multidimensional foreign policy.

On Sunday evening the President and the delegation accompanying him will attend a dinner by the Federation of Cypriot American Organisations. Foreign Minister Christodoulides will meet earlier with his Greek counterpart, Nikos Kotzias.