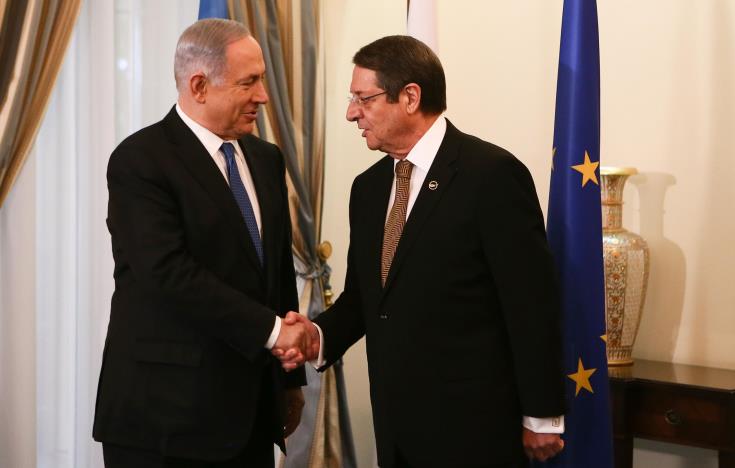 President Nicos Anastasiades will visit Israel the soonest possible, accompanied by the ministers of Foreign Affairs, Energy, Defence and Deputy Minister of Tourism, to hold extensive discussions with the Israeli government.

The decision was taken during a telephone conversation on Monday with his Israeli counterpart, Benjamin Netanyahu.

Deputy Government Spokesman Panayiotis Sentonas, in a written statement, said Anastasiades had a telephone conversation on Monday with his Israeli counterpart during which he congratulated the PM for his re-election.

During their telephone conversation, the determination of both sides to continue the excellent cooperation between the two states was underlined once again, said Sentonas. Within this framework, the two agreed that President Anastasiades and the ministers of Foreign Affairs, Defence and the Deputy Minister of Tourism visit Israel the soonest possible, to hold substantial talks.

They discussed the situation as it is developing concerning the handling of the coronavirus pandemic and the gradual lifting of the measures. President Anastasiades also discussed with Netanyahu resuming flights between the two countries as well as the measures and planning regarding tourism.

The two also referred to “efforts to further strengthen trilateral cooperation between Greece, Cyprus and Israel for the benefit of the peoples and their economies and for security and stability in the wider Eastern Mediterranean region, in the light of the illegal Turkish action”.

He also said that President Anastasiades expressed the readiness of the Republic of Cyprus to host the next high level meeting in the framework of the cooperation mechanism.