President Anastasiades says: We are vigilant and ready to react for Varosha 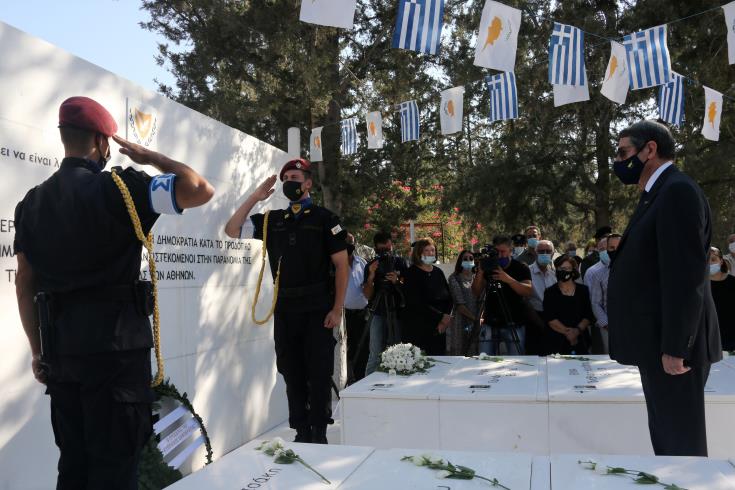 Cypriot President Nicos Anastasiades said Thursday that the government is doing everything humanly possible in the framework of diplomacy, referring to the issue of Varosha and in view of the visit of Turkish President Recep Tayyip Erdogan in the occupied Cyprus on July 20.

“We are doing everything that it is humanly possible within the framework of ‘orthodox diplomacy’ and we will be ready to react accordingly, said the President of the Republic after a memorial service for those who died during the during the coup d’etat on the 15th of July 1974.

Asked what he would advise the people of Famagusta in view of the visit of the Turkish President in the occupied areas of Cyprus and his possible announcements, the President of the Republic said that they should be patient. “We are vigilant, we are watching and we will react depending on what he will announce on his presence ”

Asked why the international community should react now, when there was not enough pressure or a veto in the last European Council on Turkey, the President pointed out that the positive EU – Turkey agenda was not approved because among the first to say “it won’t be approved” was the Republic of Cyprus through its President. He added that the Turkish President did not get a positive agenda, according to the Conclusions of the 24th and 25th June.

He also referred to statements by European Council President Charles Michel, European Commission President Ursula von der Layen, EU High Representative for Foreign Affairs and Security Policy Josep Borrell and UN Secretary-General Antonio Guterres, saying that all of them and the leaders of the five Permanent Members of the Security Council, have warned Turkey.

At the same time, he expressed his gratitude because during Wednesday’s meeting of the National Council there was, as he said, a creative dialogue and a productive presence and participation of all the leaders and a decision for a determinative confrontation of those who may happen.

On the occasion of the 47 years since the coup d’etat, President Anastasiades said that today is a day of remembrance that should never be erased because the betrayal of the junta and its collaborators here brought an untold disaster to Cyprus.

He added that everyone should be taught from the past and how some Greek-speaking people carried out orders of foreign forces in the benefit of a specific country.

Former Speaker of Parliament Yiannakis Omirou in a commemorative speech said that that forty-seven years later the necessary national unity could not be built by erasing national crimes such as the treacherous coup, but by preserving the authentic and true historical memory to shed light to the present and the future.

Omirou also said that “our duty is to reject Turkey`s fraudulent demands for a two-state solution and a confederation and to face decisively and effectively the plans for the settlement of Famagusta, the further militarization of occupied Cyprus and the invasion of the Exclusive Economic Zone”.

Court cases postponed due to Covid-19