President Anastasiades presents vision for new model for the economy 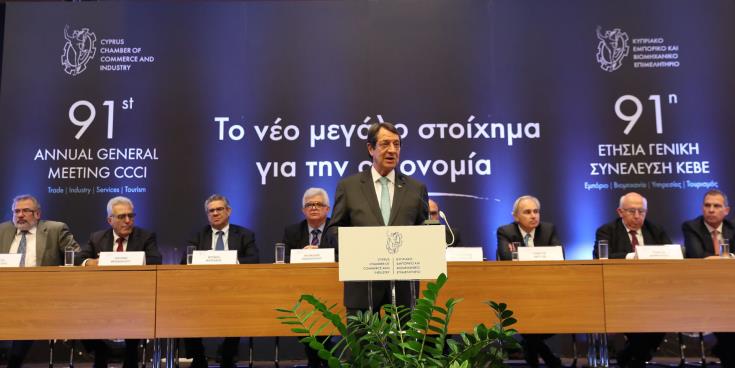 President Nicos Anastasiades has presented his vision for the new model for the economy, referring to 14 important reforms, through which the government aspired to change the image of the country over the next few years.

Addressing the 91st AGM of the Cyprus Chamber of Commerce and Industry in Nicosia, President Anastasiades said the first reform was the national health scheme, the initial phase of which is set to begin in June 2019.

President Anastasiades also expressed his support to Minister of Health Constantinos Ioannou in handling the general health scheme, calling on all interested parties to enter a dialogue so that it could be implemented within the specified time-frames.

Other reforms, he said, were improving the effectiveness of the justice system, creating an efficient public service, promoting e-governance in order to combat bureaucracy, and establishing a deputy ministry for Digital Strategy, Research and Innovation.

He also referred to completing the reform of local administration with the merging of municipalities and networking of services, implementing a national strategy for tourism with the setting up in January 2019 of a deputy ministry of Tourism, and the implementation of a simplified process for licensing projects.

President Anastasiades spoke about developing the sector of investment fund management, improving governance in research and innovation, drafting a national plan for Blockchain technology, partially privatising the Cyprus Telecommunications Authority, the Stock Exchange, and the State Lottery, reforming Central Bank structures, strengthening the Cyprus Securities and Exchange Commission, setting up an independent supervisory authority for the insurance sector and provident funds, and reforming the education system and industrial sector.

He furthermore said he would not be running for re-election and pointed out the importance of cooperation among all political forces.

In his speech, President of the Cyprus Chamber of Commerce and Industry Christodoulos Angastiniotis said Cyprus needed a new dynamic and flexible model for the economy, which would utilise traditional sectors and support new ones.

He also pointed out the importance of keeping up with technological advancement and the digital world, and reform the economy.

Referring to the Co-operative Cyprus Bank, which has been acquired by Hellenic Bank, Angastiniotis said the high compensation given to employees who opted to leave the bank has put a strain on the economy.