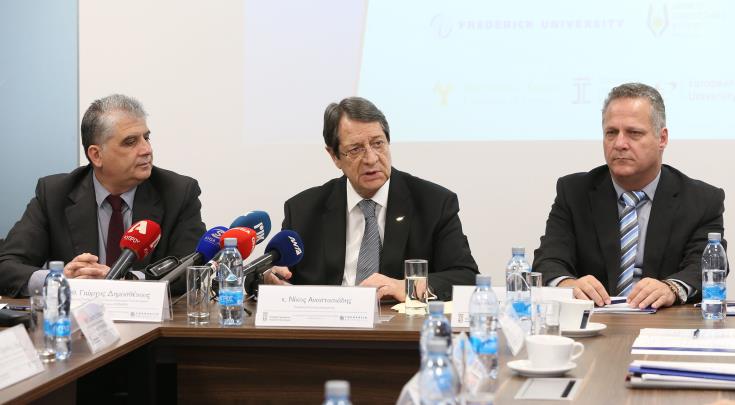 Addressing the 25th session of the Cyprus Rectors’ Conference in Nicosia, President Anastasiades assured that the government is supporting the upgrading of higher education in every way possible.

In his speech, President Anastasiades praised the results of cooperation between Cyprus universities, noting that it the positive feedback for students and the society.

The President said that one of the priorities of the government is upgrading university education through an integrated policy strategy which focusses on offering quality opportunities for university education and lifelong learning in cutting edge sectors. This will make Cyprus known abroad as a regional center of education, research and innovation.

In this context, we support in every way possible, the upgrading of higher education, including the structure and the courses provided, he remarked.

He also said that the importance he attaches to the right to equal opportunities in higher education, by supporting the adoption of specific measures, would allow the greatest possible percentage of the population to enter Universities.

In this context, Cypriot students from public and private universities benefit from student grants on the basis of economic criteria, scholarships based on academic performance and targeted financial assistance, the President said.

Eight universities operate in Cyprus, of which three are public and five private.

By In Cyprus
Previous articleMan found dead in car in Limassol; foul play not ruled out
Next article213 people arrested and sent to Turkey as FETO suspects in occupied north – Turkish media