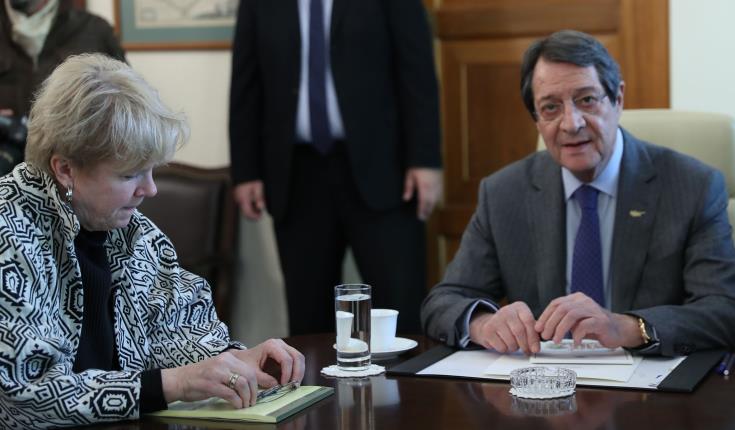 Cyprus President Nicos Anastasiades is having a meeting on Sunday morning with the UNSG`s envoy on Cyprus Jane Holl Lute, who is visiting the island to hold consultations with Anastasiades and Turkish Cypriot leader Mustafa Akinci, in the framework of the UN effort to clinch an agreement on the terms of reference that will pave the way for the resumption of the negotiations on the Cyprus problem.

Anastasides` meeting with Lute began at 1000 local time. It is also attended by Foreign Minister Nikos Christodoulides, the negotatiator of the Greek Cypriot side Andreas Mavroyiannis, Government Spokesman Prodromos Prodromou and the Director of the President`s Diplomatic Office Kyriakos Kouros.

Prodromou told the Cyprus News Agency (CNA) on Saturday that the Greek Cypriot side was looking forward to this meeting  with a view to get involved in the process for an agreement on the terms of reference “because our goal is for the negotiations to resume the soonest possible in a way that will lead to a comprehensive solution.”

Moreover, he stressed that President Anastasiades was ready to have a constructive cooperation with the UNSG’s envoy, “having a clear picture about the way the terms of reference will properly prepare an effective negotiating process as Guterres himself has been asking.”

He went on to say that “towards this direction we should certainly focus both on the (Guterres) Framework and the six parameters proposed by the Secretary – General, as well as on the convergences achieved so far, taking into consideration all other issues as well.”

Prodromou expressed the belief that “if there is a positive approach, will and determination from the other side – and particularly from Turkey – then it will be possible to reach an agreement soon on the terms of reference, in order for the negotiations to begin.”

Lute is scheduled to meet with Akinci on Monday at 1000 local time.