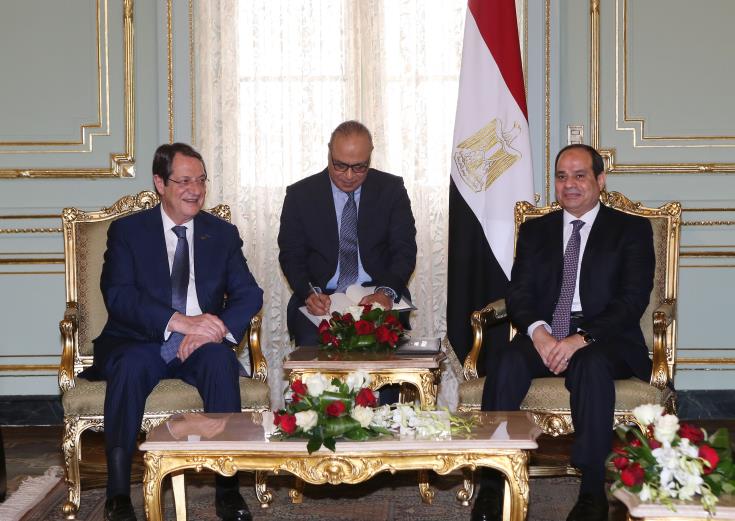 Cyprus President Nicos Anastasiades met on Tuesday with his Egyptian counterpart Abdel Fattah el Sisi in Alexandria and discussed the Cyprus problem, energy cooperation and economic relations between the two countries.  Anastasiades thanked Sisi for his support to Nicosia in the framework of the Organization of Islamic Cooperation (OIC). The two men also talked about energy projects, including the construction of a subsea pipeline for natural gas.

Speaking after the meeting in Montaza Palace, Government Spokesman Prodromos Prodromou stated that relations between the two countries, as well as between Presidents Anastasiades and Sisi, are excellent.

“Egypt is a very important country for regional cooperation, for our energy prospects and the relationship between Cyprus and Egypt demonstrates that there are very big prospects” he underlined.

He also said that during their tête-à-tête, President Anastasiades informed his Egyptian counterpart about the latest developments concerning the Cyprus problem. He thanked him for Cairo’s stance vis-à-vis Cyprus and in particular for the support in the framework of the OIC while, according to Prodromou, the two men also discussed the next steps.

On the basis of these excellent relations between Cyprus and Egypt, Prodromou said that the two Presidents also talked about the prospects of particular cooperation schemes.

He added that the discussion revolved around energy cooperation and the subsea pipeline for natural gas, which he said is at an advanced stage, as well as about fish farming and the EuroAfrica Interconnector, the underwater power cable that aims to link the Egyptian, Cypriot and Greek power grids.

Finally, Prodromou said that they also discussed other plans, including waste management and the various opportunities for investments.