President Anastasiades: Akinci should declare his position on the Guterres Framework 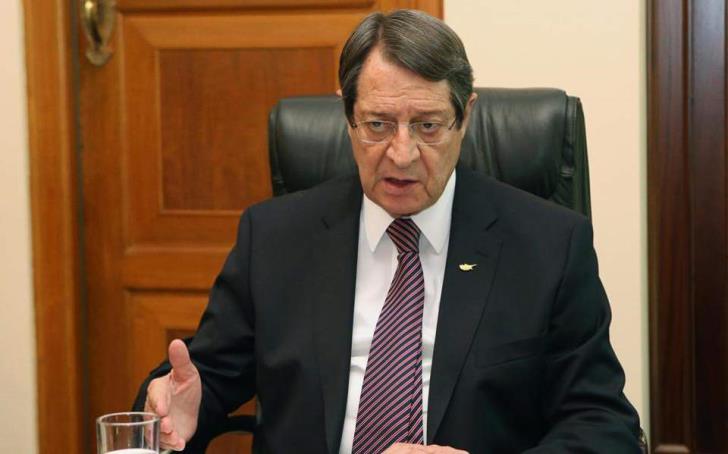 Regarding the Cyprus issue, President Anastasiades continues asserting that the most important innovation of the Guterres framework was that Cyprus is conceived in it as a ‘normal’ state without guarantors and without the presence of a Turkish army.

In the second part of his exclusive interview with “Phileleftheros”, the President of the Republic rebuffed accusations by Mustafa Akinci. On the question of whether his response to Moustafa Akinci’s invitation to agree on the Guterres Framework was a positive one the President said: “Mr. Akinci declared himself ready to accept the Guterres framework as a strategic agreement and then enter negotiations again. I said then, that I consider this a positive development, if what he means by ‘Guterres Framework’ is the framework as it was finally formed on July 4th with its amendments on issues of guarantees, invasion rights and occupying troops “.

As he pointed out, the Greek-Cypriot side was the only one that positively addressed the Guterres framework from the first moment on in Crans Montana.

As he said: ‘on July 6th, I took one step further to help the process and drafted a full and comprehensive document dealing with the new state of affairs. This includes the abolition of guarantees and invasion rights, the withdrawal of occupation troops, ways of monitoring the implementation of what will be agreed between the two communities and the mechanisms to oversee the implementation of what had been agreed upon. I also suggested that, in view of the withdrawal of the troops and to face possible intercommunal conflicts, there could be a multinational police force of two thousand for some time.

Our proposal provided that if there is an episode in one of the constituent states, the State Police will be responsible at first. Then, if it can not control the situation, then the Federal Police will be responsible. Then, in the third year, and if necessary, a multinational police force may take over. Finally, should the situation remain out of control, the President or Vice-President may address the UN Secretary-General so that the Security Council decides what measures should be taken.

“What is needed is a new security regime and not the continuation of the old system. Unilateral invasive rights and the Treaty of Guarantee should be abolished. The current situation should be replaced by a strong mechanism for implementing, monitoring and supervising the implementation of the solution: this mechanism ought to also have an international dimension (UN / Multilateral Framework), in order for Cypriots of both communities to feel safe .

However, when he talked about accepting the Guterres Framework, Mr Akinji himself clarified that he did not accept a change in the current status quo regarding guarantor powers, invasive rights and the presence of the Turkish army. So how was it possible to accept as a strategic agreement something that excluded two important aspects, the invasive rights and the Turkish claim for the permanent presence of Turkish troops in Cyprus, especially since this was the cause of the failure at Crans Montana”, he said.

The President concluded, “Mr Akinji, instead of criticizing me and trying to shift responsibilities, needs, if he is indeed ready to negotiate, to declare his positions on all the issues in the Guterres Framework and especially on what the Turkish side was not willing to discuss at Crans Montana”.