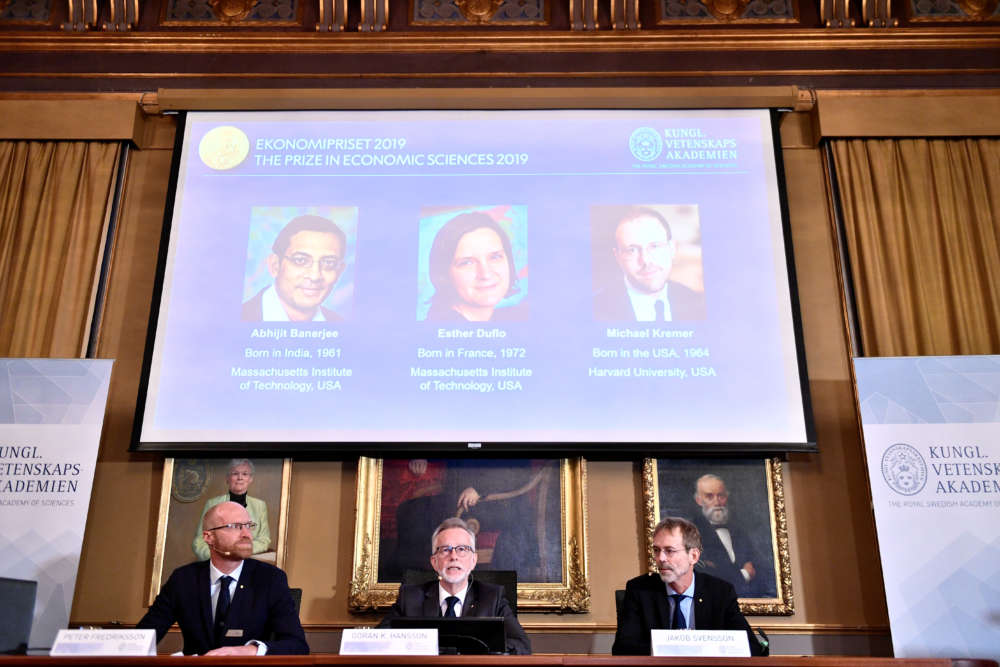 U.S.-based economists Abhijit Banerjee, Esther Duflo and Michael Kremer won the 2019 Nobel Economics Prize on Monday for their work in fighting poverty that has helped millions of children around the world.

French-American Duflo becomes only the second female economics winner in the prize’s 50-year history, as well as the youngest at 46. She shared the award equally with Indian-born American Banerjee and Kremer, also of the United States.

The Royal Swedish Academy of Sciences said their work had shown how poverty could be addressed by breaking it down into smaller and more precise questions in areas such as education and healthcare, making problems easier to solve.

It said the results of their studies and field experiments had ranged from helping millions of Indian schoolchildren with remedial tutoring to encouraging governments around the world to increase funding for preventative medicine.

“It starts from the idea that the poor are often reduced to caricatures and even the people that try to help them do not actually understand what are the deep roots of (their) problems,” Duflo, speaking by telephone, told a news conference in Stockholm.

“Our goal is to make sure that the fight against poverty is based on scientific evidence,” she added of an approach that has included evaluating the impact of often obvious-sounding problems such as a lack of textbooks or teacher absence.

The team have notably been associated with the “Teaching at the right level” (TarL) programme which has helped 60 million children in India and Africa and focuses on maths and reading skills for primary school pupils.

Duflo said the importance of the two most commonly cited approaches to tackling poverty – foreign aid and freeing up trade with poor countries – had often been “overstated”.

While the United Nations estimates that global poverty has been cut by more than half since 2000, it says one in ten people in developing regions still live on less than $1.90 a day. In sub-Saharan Africa, that proportion rises to 42 percent.

Asked whether Duflo’s award was an attempt to redress the gender imbalance in the prize’s history, Peter Fredriksson, chairman of the Nobel Committee for Economic Sciences, said it showed that women were now more present in economics.

Duflo remarked that it came at an “extremely important and opportune time” for women in a sector that has traditionally been very male-dominated.

“We are at a time when we are starting to realise in the profession that the way that we (treat) each other privately and publicly is not conducive all the time for a very good environment for women,” she said.

The 9 million Swedish crown ($915,300) economics prize is a later addition to the five awards created in the will of industrialist and dynamite inventor Alfred Nobel, established by the Swedish central bank and first awarded in 1969.

Economics is the last of the awards to be announced with the winners for medicine, physics, chemistry, literature and peace having been unveiled over the course of last week.

The 2018 Nobel Economics Prize was jointly awarded to U.S. economists William Nordhaus and Paul Romer, pioneers in adapting the western economic growth model to focus on environmental issues and sharing the benefits of technology.

Nordhaus’ recognition has proved controversial, with critics arguing the model he created to describe the interplay between the economy and the climate seriously underestimated climate change-related risks.

By Bouli Hadjioannou
Previous articleTrump: Kurdish-led forces may intentionally be releasing Isis militants
Next articleEU: ‘restrictive measures’ for those involved in illegal drilling in Cyprus’ EEZ