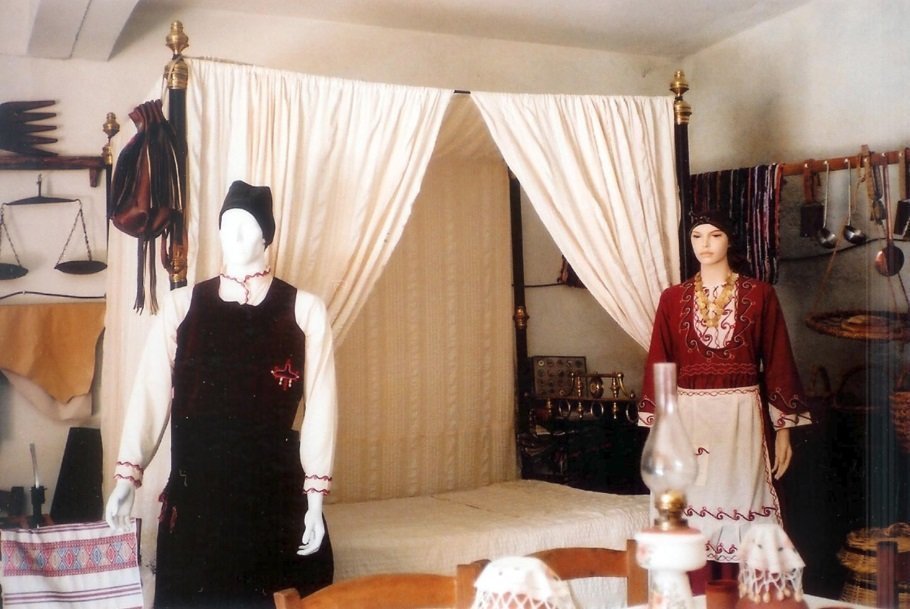 The “Popular Art Museum” is situated at the entrance of the core of Spilia, upon the community’s main road. It was established in 2005 by the association “PROODOS”. The inspirer and prime mover for the creation of this museum was the Secretary of the Association, Ktoris Michael.

Displayed in this museum, are almost all the furniture and utensils of a traditional house. The bed with the attached mosquito curtain on the top and next to it two dolls representing a man and a woman dressed in traditional gowns. In the middle of the room, a food table with wooden chairs which have clothed seats, a clay wine jug and clay glasses remind you of the good old times. A straw basket in which people used to put bread in hangs over the roof, clay jugs in which pieces of meat preserved in pork fat were put, clay containers in which the traditional white cheese called ‘halloumi’ was placed and a cabinet used for storing another kind of traditional white cheese called ‘anari’, awake our childhood memories. Projected in another corner is a space formed in such a way that it would hold the traditional clay jugs that were used for carrying water and an actual clay jug, the mouth of which closes with a savory and a handkerchief on top of it so that it would provide extra protection to the water.

A speltered-made bathroom with a small tap next to it (a small semi circular tank) hanging over the wall. A broom for the bedrooms and a ‘sarka’, another kind of traditional broom used for cleaning the yard, complete the cleaning tools. A wardrobe with a traditional mirror leaned against a wall and an iron which operated with charcoal posing on a wooden kind of shelf, are some of the simple tools that were used for fig during the era of our parents.

Apart from the equipment of an old house, there is also the gear used for household occupations such as the blending and making of ‘halloumi’, the traditional white cheese of Cyprus. Also displayed are some of the means of traditional professions or occupations. The barber and the shoemaker steal the show of the professions whereas the farmer and the builder do not get passed unmarked.

Finally, an adorable donkey with its muzzle, the pack saddle tied with a rope and a cute piece of clothing which was used to put the pack saddle on, certainly attract attention.

A single page is not enough to include the description of the ‘Popular Art Museum’. It simply provides a vague picture of its rich and wisely fixed up content.

Courtesy of the Community Council of Spilia