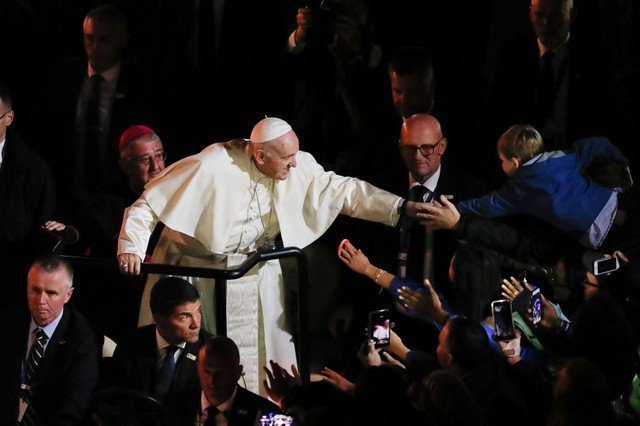 Pope Francis vowed on Saturday to end the sexual exploitation of children by clergy during a highly-charged visit to once deeply Catholic Ireland and, according to victims, said the corruption and cover up of abuse amounted to human excrement.

On the first papal visit to the country in almost four decades, Francis used a speech at a state event that was also attended by some abuse survivors to acknowledge that it was to the Church’s shame it had not addressed these ‘repugnant crimes’ and said he sought a greater commitment to eliminating this ‘scourge’.

He later met privately for 90 minutes at the Vatican embassy with eight victims of clerical, religious and institutional abuse.

In a statement, the representatives from the Survivors of Mother and Baby Homes group said Francis condemned corruption and cover up within the Church as ‘caca’, an Italian and Spanish word for human excrement. A Vatican spokesman had no comment on the details of what was said in the meeting. A Vatican official said he would not be surprised that the pope had used the word.

‘Very powerful meeting. He listened with a genuine interest’, said Clodagh Malone, who was born in one of the state-backed homes for unwed mothers and adopted at 10-weeks-old.

The pope earlier spoke publicly about abuse, saying he could not ‘fail to acknowledge the grave scandal caused in Ireland by the abuse of young people by members of the Church charged with responsibility for their protection and education’.

Years of sexual abuse scandals have shattered the credibility of the Church as a moral leader in Ireland and driven many from the Church. In the past three years, Irish voters have approved abortion and gay marriage in referendums, defying its wishes.

More than three-quarters of Ireland’s population flocked to see Pope John Paul II in 1979 when divorce and contraception were illegal. Francis was greeted by far smaller numbers.

Large images of abuse victims and the hashtag #Stand4Truth – promoting a gathering of survivors and supporters elsewhere in Dublin when the pope says mass on Sunday – were projected onto some of the capital’s most recognised buildings on Friday night.