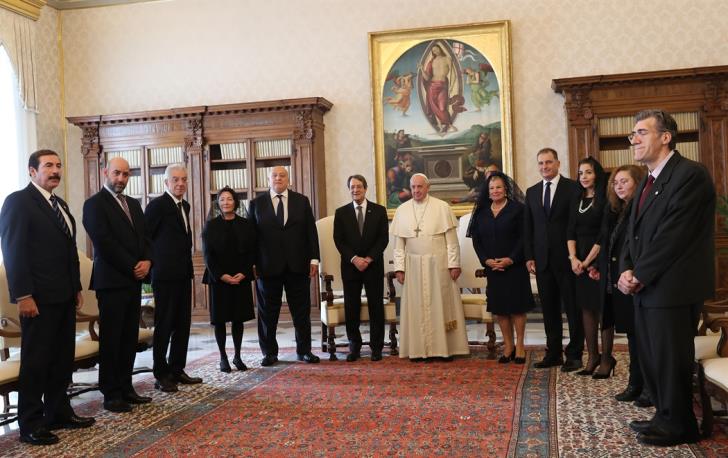 Pope Francis will visit Cyprus next year, 60th anniversary of the establishment of the Republic and 10 years after the visit of Pope Benedict to the divided island.

This is what President Nicos Anastasiades said in a statement on Monday after talks with the Pope at the Vatican during a state visit to the Holy See.

Anastasiades also said that the two had an exchange of views on international issues such as climate change, the rising number of refugees and the Middle East crisis.

And that he got the opportunity to brief the Pope in detail about Turkey’s illegal actions in Cyprus since its 1974 invasion and continued occupation of the island’s territory.

“The Pope is particularly interested in not only hearing but also in understanding the difficulties caused by Turkey’s invasion and occupation as well as by its continued illegal actions in the island’s Exclusive Economic Zone,” the statement said.

“I had the opportunity at the same time to invite him to visit Cyprus, something that he was very pleased to accept,” he added.

Accompanied by his wife Andri, Anastasiades arrived at the Vatican on Monday morning together with Cypriot ambassador to the Holy See George Poullides.

Pope Francis welcomed the Cypriot delegation in a private meeting, where they exchanged gifts.