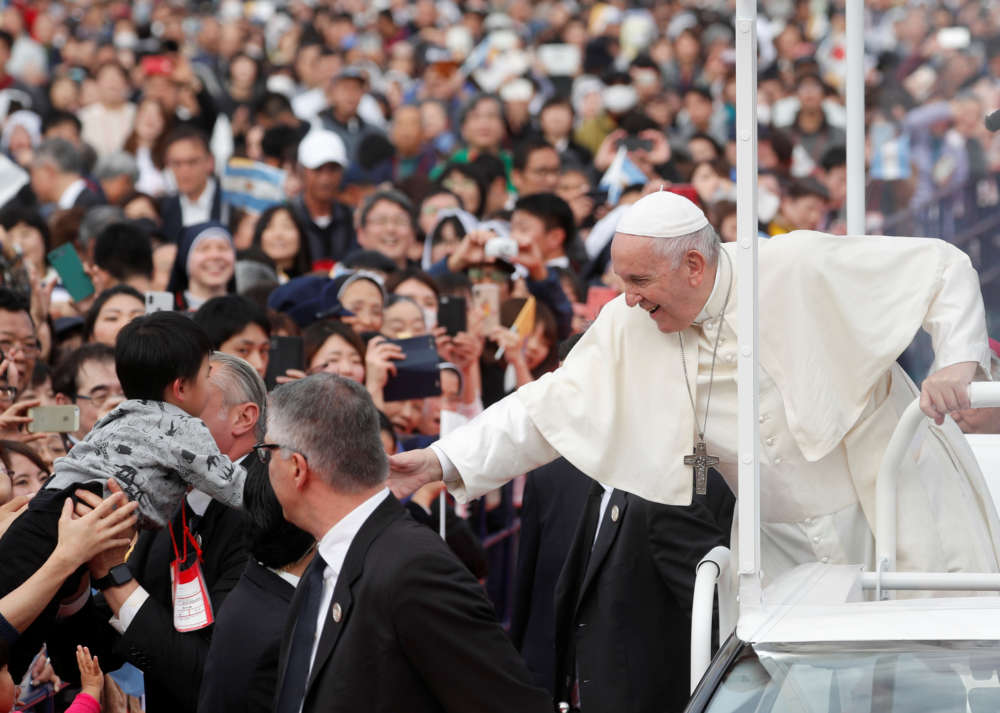 Pope Francis, speaking in one of only two cities hit by atomic bombs in history, appealed on Sunday for the abolition of nuclear weapons, saying their mere possession was perverse and indefensible.

He restated his support for a 2017 treaty to ban nuclear weapons agreed by nearly two-thirds of U.N. members, but opposed by big nuclear powers who say it could undermine nuclear deterrence, which they credit with averting conventional war.

“The possession of nuclear and other weapons of mass destruction is not the answer (to longings for peace),” Francis said, after having closed his eyes in prayer and lighting a candle in memory of the victims.

“Our world is marked by a perverse dichotomy that tries to defend and ensure stability and peace through a false sense of security sustained by a mentality of fear and mistrust,” he said in a somber voice, amid driving rain and strong wind.

“Peace and international stability are incompatible with attempts to build upon the fear of mutual destruction or the threat of total annihilation.”

Francis, who was speaking at Nagasaki’s Atomic Bomb Hypocenter Park, ground zero of the bomb the United States dropped on Aug. 9, 1945, instantly killing 27,000 people, also decried what he called a dismantling of non-proliferation pacts.

Nagasaki was the second city hit by an atomic bomb during World War Two. Later on Sunday, the pope was due to visit Hiroshima, site of the first blast, which instantly killed about 78,000 people.

About 400,000 more eventually died of radiation illness and injuries caused by the bombs dropped by the United States in an effort to end the war.

“Here, in this city, which witnessed the catastrophic humanitarian and environmental consequences of a nuclear attack, our attempts to speak out against the arms race will never be enough,” Francis said in his emotional appeal.

Resources spent on the “arms race” should be used for development and protection of the environment, instead.

“In a world where millions of children and families live in inhumane conditions, the money squandered and the fortunes made through the manufacture, upgrading, maintenance and sale of ever more destructive weapons, are an affront crying out to heaven,” he said.

Last August, the United States pulled out of one landmark strategic arms accord, the Intermediate-Range Nuclear Forces Treaty (INF), citing violations by Russia that Moscow denies.

Nuclear experts said it also appeared doubtful that agreement on a full-fledged replacement for the New START nuclear arms control treaty between Russia and the United States will be in place before it expires in February 2021.

The bombing is seared in the collective memory of the people of the green and hilly harbour city of Nagasaki and has been passed on through the generations.

“We can’t have any more atomic bombings. It’d be great if that message would get across to the world. I’d like it if nuclear weapons were eliminated and there wasn’t any more war,” said Chizuko Hisamatsu, 66, a housewife. “I think I may cry.”

The pope delivered his appeal standing near a large print of a famous photograph taken by an American soldier shortly after the blast, showing a Japanese boy taking his dead younger brother to be cremated.

After his address, Francis spoke at a monument to faithful martyred during the 250 years in which Christianity was banned in Japan, forcing believers to go underground or face death.

“Hidden Christians” blended Christianity with Buddhism and native Shinto beliefs to survive, and Francis may meet several members of the ageing, dwindling population later on.

Jesuits brought Christianity to Japan in 1549, but it was banned in 1614. Missionaries were expelled and the faithful were forced to choose between martyrdom or hiding their religion. The ban was lifted in 1873.