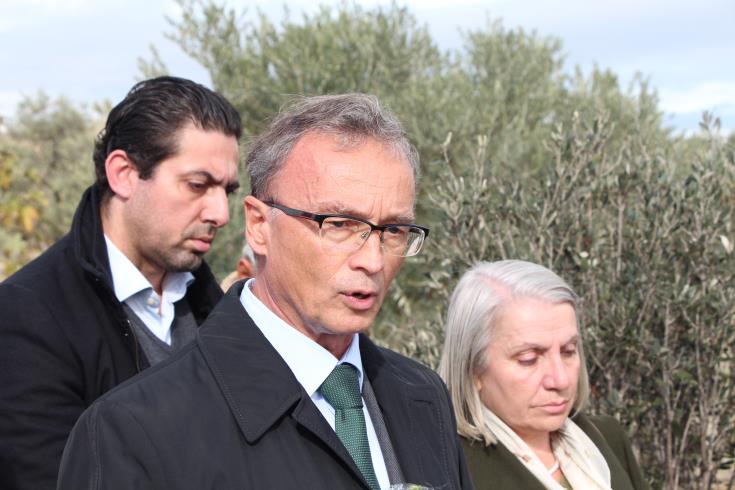 Representatives of Democratic Rally, AKEL, EDEK, BKP, YKP, CTP and TDP visited on Wednesday two burial sites in Oroklini, a village in the Larnaca District, and Galateia in the Turkish-occupied part of Cyprus, and left some flowers there. The sites contained mass graves of Turkish Cypriots and Greek Cypriots, respectively.

This is the first time that this number of political parties from both communities visits simultaneously burial sites of Greek Cypriot and Turkish missing persons in both the free areas and the occupied part of Cyprus.

Party representatives were accompanied by the Ambassador of the Slovak Republic to Cyprus, Jan Skoda, who read a declaration on their behalf.

The visit was organised with the assistance of the non-governmental bi-communal Association of Relatives of Missing Persons and Victims of War “TOGETHER WE CAN”.

According to the declaration, political parties expressed their sorrow over civil victims of military actions and ethnic conflicts in the island.

“Leaders and representatives of Greek Cypriot and Turkish Cypriot political parties do support efforts of the Committee on Missing Persons (CMP) to identify all remaining missing persons, civilians or military, and heal the pain of their families” it is noted.

To achieve this goal, they call upon the public of both communities for more accurate information that could lead to burial sites and the identification of missing persons.

“Leaders and representatives of Greek Cypriot and Turkish Cypriot political parties are convinced that the time has come for official actions on behalf of the two communities in honour of the missing people of both communities” the declaration goes on.

“In this direction, they call upon the two leaders to consider (a) the construction of common monument and (b) to declare a joint Commemoration Day, both dedicated to the memory of victims of the Cyprus conflict, Greek Cypriots and Turkish Cypriots” it is noted.

Leaders and representatives of Greek Cypriot and Turkish Cypriot political parties express finally their appreciation for commemorative acts performed on both burial sites and for awarding symbolic memorial plaquets to relatives of missing persons.

Present in Oroklini was also Cemal Dimililer, the son of one of the 11 Turkish Cypriots who were buried in the area, after they were ambushed and killed on May 14, 1964. Their remains were discovered by CMP in 2007.

Speaking to CNA, Dimililer said that he feels there is nor a past, neither a future for him. “The future belongs to my children. I wish for them never to have to fight with anybody. I only want peace” he said. He awarded a plaquet to Elena Michael, a local who tended the olive trees planted in the spot where the remains of his father were discovered.

Journalist Sevgul Uludag recalled an event organised on spot by the “Hands across the divide” an organisation of Greek Cypriot and Turkish Cypriot women.

Party representatives visited next the village of Galateia, leaving some flower in the shores of the lake where the mass graves of Greek Cypriots were discovered by CMP in 2017.

Christina Pavlou Solomi Patsia was trying since 2008, together with Uludag, to find information about her father and brother who were brought there during the Turkish invasion in August 1974.

She also found support from Selda Shafak, a local, and her family. After awarding a plaquet to Selda to thank her, Patsia said she looks forward to a common monument for all civilian victims in 1963-64 and 1974. “They are all victims for Cyprus, and they lost their lives in vain, she concluded.