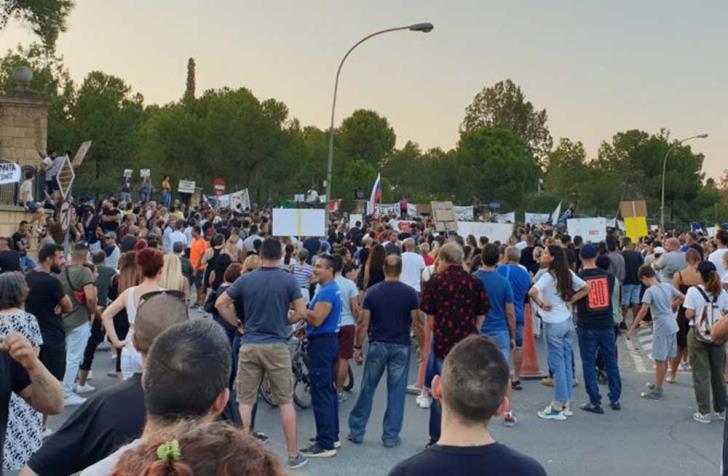 Cyprus Police have been strongly criticised after they watched in apathy on Saturday a crowd of some 1000 protesting outside the Presidential Palace with complete disrespect to social distancing rules.

The crowd was calling for an end to covid-19 restrictions, the new world order and the idea of mandatory vaccinations.

Justice Justice and Public Order minister Emily Yioliti is meeting on Monday with law enforcement authorities to determine how to practically enforce protest prohibition directives within the framework of covid-19 restrictions.

Yioliti said in a tweet on Sunday that the purpose is to make clear how to best enforce the measures in order to secure the constitutional freedom of speech. But at the same time, not to allow people to abuse it at the expense of other citizens, including police officers.

The protest was a violation of the Covid measures considering that gatherings of only 50 people are allowed.

And even though mask-wearing only applies to closed public spaces, the people who attended the protest applied no social distancing rules whatsoever.

Similar protests attracting thousands were held on the same in day in London, Berlin, and other European countries.