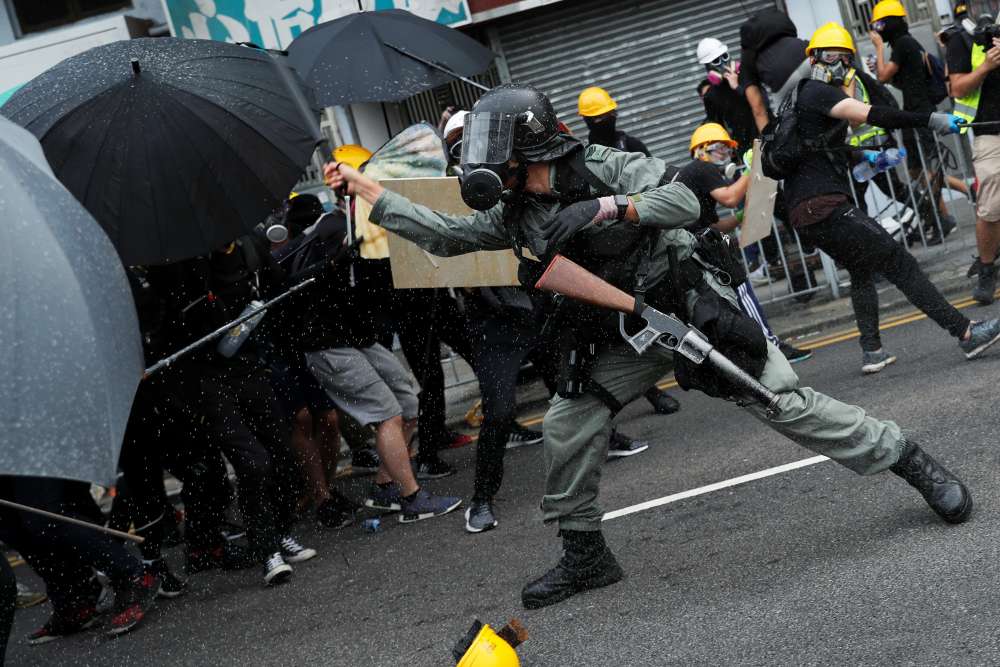 Activists pushed ahead with the march in Yuen Long, scene of the attack by club-wielding men, in spite of a refusal by police to allow the protest on safety grounds.

Rocks and bottles were thrown by protesters, who built barricades out of street furniture and umbrellas, creating multiple stand-offs.

While hundreds of protesters left the area as it grew dark. several hundred more remained. Many were armed with sticks and improvised shields made from wood, surf boards, cardboard and other materials.

“We are all waiting for the white shirts to come out. If they want to fight us we are ready,” said Harlem Lo, a protester wearing a black T-shirt, who stood his ground despite riot police attempts to clear the area.

“We’ll get revenge for the beatings if they come out,” he said.

On Sunday, a car was dented and its windows smashed near the village.

“They failed the public,” Kevin, a protester in a red T-shirt, said of the police earlier in the afternoon, as he stood outside the police station, gripping its gates.

“They deliberately let the triads beat up protesters to get revenge on us … We’re here to teach them a lesson,” he said, as he shouted an obscenity at the police.

“Some hurled bricks and hard objects at police officers and charged police cordon lines,” police added in a statement.

The Yuen Long attack and the vandalism at the Liaison Office marked new fronts in a protest movement that has intensified over the last two months.

The protests, considered the most direct challenge to the authority of China’s President Xi Jinping, mushroomed on Friday as thousands of activists thronged the arrivals halls of Hong Kong international airport.

The protesters, initially demanding the scrapping of a bill that would have allowed people to be sent to mainland courts for trial, are now also seeking independent inquiries into police use of force, the resignation of Hong Kong leader Carrie Lam and full democratic reform – anathema to Beijing’s Communist Party leadership.

The crisis is exposing fissures in Lam’s administration, with police chiefs and rank-and-file officers enraged at an apology over last weekend’s attacks by her chief secretary on Friday, apparently made without consultation.

The official, Matthew Cheung, said the government would not shirk its responsibility “and the police’s handling fell short of residents’ expectations”.

Britain handed Hong Kong to China in 1997 amid guarantees that its core freedoms and autonomy, including the right to protest and an independent judiciary, would be protected under a “one country, two systems” formula.

Many fear those rights are under threat as Beijing’s reach extends into the city.

Activists told Reuters they feared Saturday’s protest would turn violent, given anger among the protesters over last Sunday’s violence and a determination among some to challenge villagers they believe are close to triad groups in the area.

“We are hoping for a peaceful night,” said Neil, masked, in his mid-20s, standing next to a friend who was strapping on a hard hat. “We want Yuen Long to be safe and peaceful. But there still might be trouble so we have to be prepared.”

Several banks in the area did not open on Saturday and many businesses were shuttered.