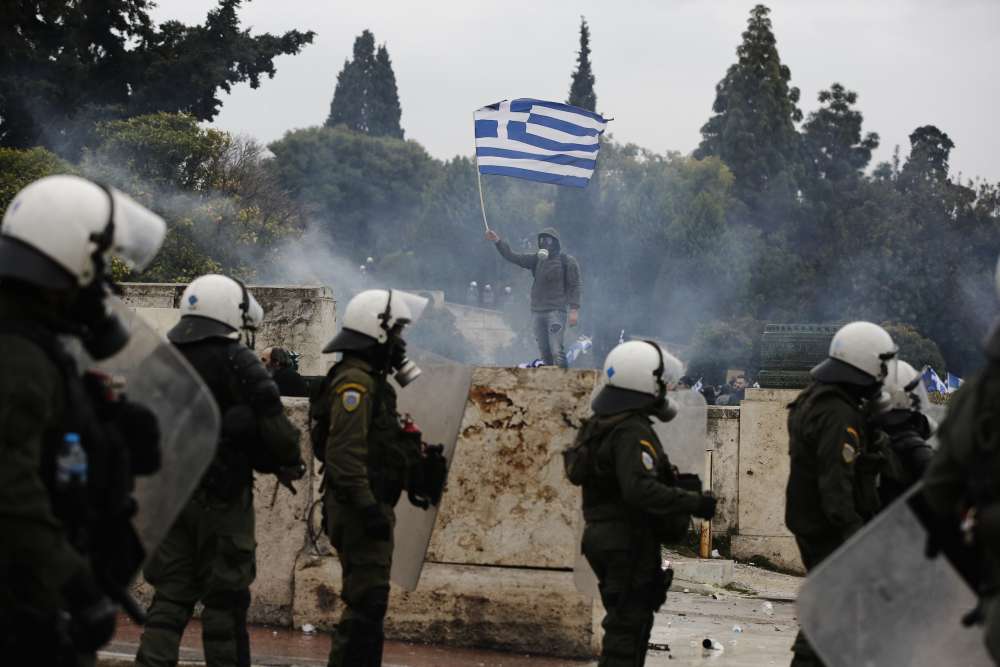 Police fired tear gas to disperse protesters outside parliament on Sunday as tens of thousands of Greeks rallied in Athens to protest ahead of next week’s parliamentary vote to ratify a name deal with the Former Yugoslav Republic of Macedonia.

Central Athens turned into a sea of people holding blue and white Greek flags as thousands came from all over the country to rally against the accord to name the ex-Yugoslav state North Macedonia.

Many Greeks believe the name Macedonia implies a territorial claim over their country’s own northern region of that name.

The issue evokes strong emotions among Greeks who consider Macedonia, the ancient kingdom ruled by Alexander the Great, to be an integral part of their homeland and heritage.

The accord, signed by the two governments, unblocks the ex-Yugoslav republic’s desire to join NATO and the European Union once it is ratified by Greece‘s parliament.

“We cannot stomach this deal, to give away our Macedonia, our history,” said pensioner Amalia Savrami, 67, as she waved a large Greek flag on Athens’s Syntagma Square.

FYROM declared independence in 1991, avoiding the violence that accompanied much of the break-up of Yugoslavia. Prime Minister Zoran Zaev has sought to accelerate the country’s bid to join the EU and NATO and to work on resolving the decades-old name dispute with Greece.

Greece had agreed that until the name dispute is resolved, its northern neighbour, with a population of about 2 million, could be referred to internationally as “FYROM” – Former Yugoslav Republic of Macedonia. That is the name under which it was admitted to the United Nations in 1993.

Settling the issue would be hailed as a success by Greek Prime Minister Alexis Tsipras, whose left-right coalition came to power in 2015. He won a confidence motion this month after the junior partner in his coalition pulled out.

“The Prespes accord is a historic step not only for the two countries and the broader region, but for Europe as a whole. It cements relations of friendship, cooperation and stability,” Tsipras told Sunday’s Avgi newspaper.

The agreement with Skopje had strained relations with the right-wing Independent Greeks party, his coalition ally, which objected to the use of Macedonia in any agreed name.

United Nations diplomat Matthew Nimetz, who has mediated talks between the two countries, said he looked forward to Greece‘s ratification of the accord after FYROM delivered on related constitutional amendments.

“As in the past, the United Nations remains committed to working with the two parties in finally resolving the difference between them,” he said in a statement.

Greek police said that 10 officers were wounded in clashes with demonstrators after being attacked with stones and petrol bombs.

By In Cyprus
Previous articleTrump says no amnesty for ‘Dreamers,’ signals support in broader deal
Next articleStagnant wages, rising rents