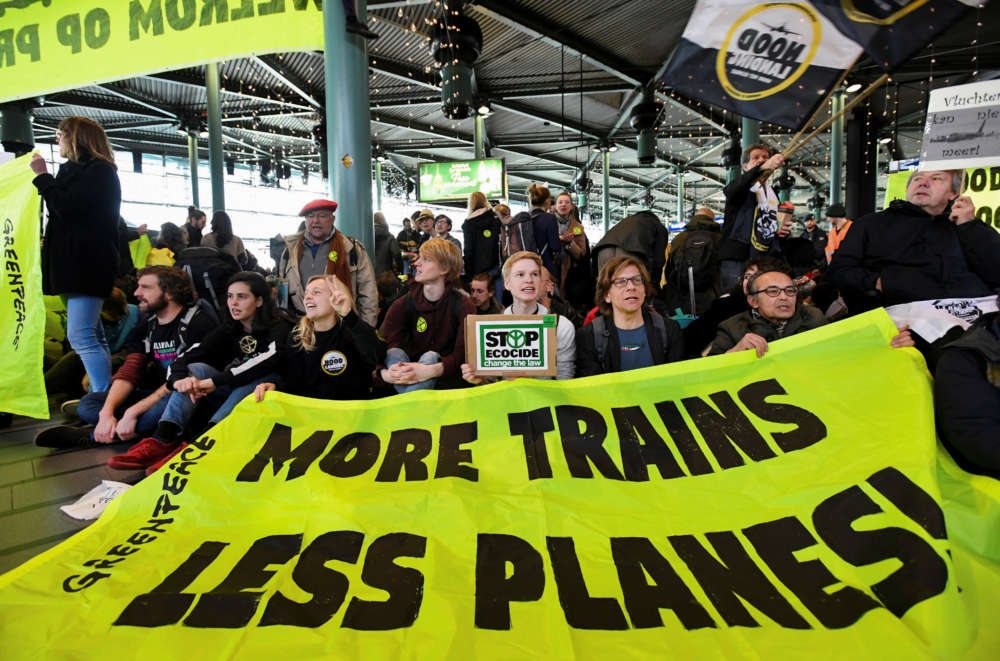 Dutch military police began forcibly removing a group of environmental protesters from the main hall of Amsterdam’s Schiphol airport on Saturday after they refused to leave.

Hundreds of protesters had arrived for a demonstration against “the big polluter” Schiphol organised by Greenpeace, which had been granted a permit to protest outside the building only. The group rejected that condition, saying citizens’ rights to peaceful protest should not be restricted.

A group of around 100 activists from Greenpeace and Extinction Rebellion gathered inside the airport’s entrance hall, chanting slogans for “climate justice” and carrying signs including one that advised travellers to “take the train”.

Greenpeace is demanding that the airport draw up a better plan of action to curb the pollution it generates.

Dozens of police from the Marechausse, the force that guards Dutch borders, began removing the protesters one at a time, dragging or carrying those that resisted.

“After multiple warnings to leave Schiphol Plaza peacefully, the Marechausse has now begun arresting Greenpeace protesters,” the force said in a statement.

Saturday’s demonstration did not disrupt air traffic at Schiphol, one of Europe’s busiest airports.

In its call to activists to attend the protest, Greenpeace said on its website: “We’re in the middle of a climate crisis, but the big polluter Schiphol is being allowed to keep growing and polluting even more.”

Schiphol, owned by the Dutch state, says it does have a climate plan, which among other measures includes cutting emissions on the ground by using electric vehicles.

“We realise that more is needed,” the airport said. “This would involve more energy-efficient and cleaner aircraft, electrically-powered flight and the use of sustainable fuels.”

In Madrid on Saturday, a two-week-long U.N. summit on climate change was mired in disputes over how to implement the 2015 Paris Agreement on global warming, with big polluting nations under last-ditch pressure from smaller nations to show serious commitment to tackling the issue.