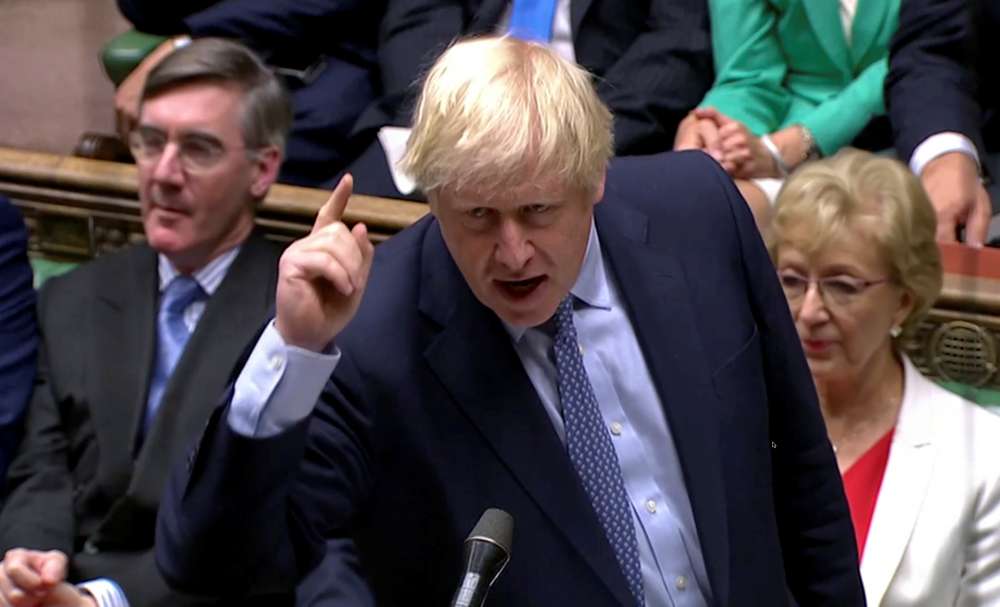 British Prime Minister Boris Johnson taunted his rivals on his return to parliament on Wednesday, goading them to either bring down the government or get out of the way to allow him to deliver Brexit.

Waving his arms and yelling “come on, come on then” to a raucous House of Commons, Johnson told his opponents they could bring a vote of no-confidence in the government on Thursday and trigger an election to finally break the Brexit impasse.

Britain faces an Oct. 31 deadline to leave the EU, but after three years of political crisis, with parliament unable to agree on Brexit, it remains unclear when, if or on what terms the country will leave the bloc it joined in 1973.

“Will they have the courage to act or will they refuse to take responsibility and do nothing but dither and delay?” he asked, saying his government would not “betray the people” over Brexit.

Once again the leaders of the opposition parties, including Labour’s Jeremy Corbyn, refused to engage, saying they would only agree to an election once Johnson had ruled out leaving the European Union without a deal.

After helping to force through a new law requiring the government to ask for a delay to Brexit if it fails to secure a deal by Oct. 19, Corbyn again set out his demands.

“No one can trust this prime minister,” Corbyn said. “If you want an election, get an extension.”

A Labour source said the party would not take up the prime minister’s offer of a no confidence vote on Thursday “while there’s the threat of Johnson using it to ram through a no deal before polling day”.

Johnson was appearing in parliament for the first time since the Supreme Court ruled he had acted illegally in advising Queen Elizabeth to suspend parliament.

Having lost his majority and a series of parliamentary votes on Brexit, Johnson had suspended the House of Commons for five weeks. But the country’s top court ruled the closure was void.

Parliament remains in deadlock, with Johnson intent on leading Britain out of the EU with or without an exit agreement while most lawmakers are determined to block a no-deal scenario, which they fear will cause huge economic disruption.

Johnson‘s demands for an election have already been rejected twice.

Running out of options and with an eye on an election campaign, he sought on Wednesday to paint his opponents as not just opposed to a no-deal Brexit, but opposed to Brexit altogether: defying the wishes of the people.

Johnson‘s spokesman said the opposition’s refusal to trigger an election would be taken by the government as a green light to carry on with its Brexit strategy, to leave by Oct. 31. “It’s time to put up or shut up,” he said.

As lawmakers around the House shouted “resign, resign”, Johnson said his opponents were now refusing to agree to an election for fear that they would not win power.

“I think the people of this country can see perfectly clearly what is going on,” he said. “They know that this parliament does not want to honour its promises to respect the referendum.”

“The leader of the opposition and his party do not trust the people.”

Ahead of Johnson‘s appearance before lawmakers, his attorney-general, Geoffrey Cox, described the British parliament as “dead”. In a defiant outburst he labelled the government’s opponents as cowards for refusing to call an election.

Before the suspension, an alliance of opposition lawmakers backed by rebel members of Johnson‘s Conservative Party forced through the law requiring him to ask the EU to push back the deadline if no exit deal is agreed by Oct. 19.

Under questioning, Cox said the government would comply with the law forcing the delay if no deal was struck.

Johnson has repeatedly said he can strike an exit deal with the EU’s 27 other members at a summit on Oct. 17-18.

However, EU negotiators say he has made no new proposals capable of breaking the deadlock over the issue of how to manage the border between Ireland, an EU member, and Northern Ireland, which is part of the United Kingdom, after Brexit.

Johnson has aroused strong feelings among his opponents.