Piano Concert: From Theory to Practice 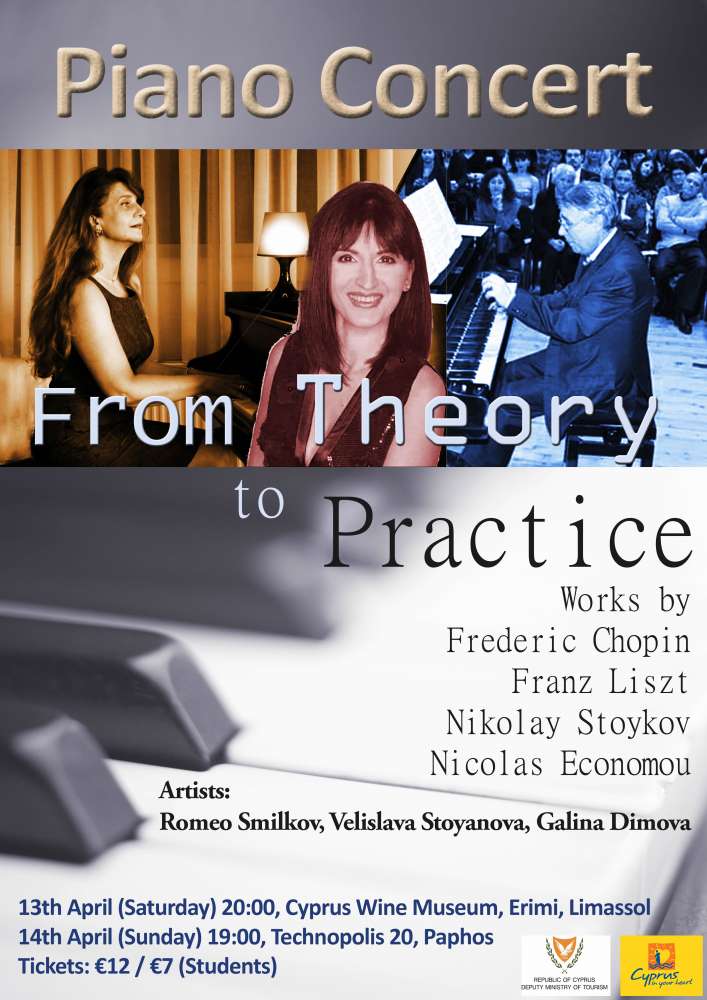 The Bulgarian professor and pianist Romeo Smilkov returns to Technopolis 20 in Paphos on the 14th of April, Sunday, at 19:00. Enjoy this special a piano concert with Romeo Smilkov and his doctorate students Dr. Galina Dimova and PhD candidate Velislava Stoyanova. The programme includes works by the Cypriot composer Nicolas Economou, a selection of pieces by the Bulgarian composer Nikolai Stoikov and works by F.Chopin and F.Liszt.
Entrance: €12 €7 (students)
Reservations are necessary at 70002420.

A few words about the musicians
Romeo Smilkov was born on the 7th July, 1960 in Chirpan, Bulgaria. A graduate of the National Music Academy “Prof. Pancho Vladigerov” in Sofia, he studied piano with Prof. Luba Encheva and Prof. Milena Mollova. Among his postgraduate studies was a master class with Prof. Vera Gornostaeva (Moscow) at the Varna Festival in Bulgaria.
He counts numerous international and national prizes such as 1st Prize of the Salerno Piano Competition in Italy (1979); 2nd Prize of the Razgrad Piano Competition, Bulgaria (1984) and 3rd Prize of the Liszt-Bartok Competition (1989), organized by The Hungarian Cultural Center in Sofia. In 2011, he received the Special Prize “Medeniya Tchan” of the Academy of Music, Dance and Fine Arts, Plovdiv and in 2018 the “Golden Muse” by the Russian Cultural Center in Sofia.
He also participated in the 1st International Piano Competition in Tokyo, Japan (1980), in the ‘Tchaikovsky’ Piano Competition in Moscow, Russia (1982) and in the ‘Liszt’ Competition/Festival in Budapest, Hungary (1986).
Romeo Smilkov has given more than 840 concerts in Bulgaria and in sixteen countries of Europe and Asia (Russia, Japan, China and others). He appeared as a soloist with numerous orchestras in Bulgaria and abroad.
Since 1991, Romeo Smilkov has been teaching Piano Instrumental Art at the Academy of Music, Dance and Fine Arts in Plovdiv, Bulgaria. In 2008 he was appointed Associate Professor in Piano Art. From 2014, he is a piano Professor at the Academy of Music, Dance and Fine Arts and at the New Bulgarian University in Sofia.
In 2012, he obtained his PhD for the theoretical research on the piano compositions of the Bulgarian composer Nikolay Stoykov. He has published three books as a result of his research in the field of the Bulgarian clavier music (Ivan Spassov, Dimiter Nenov).
He released three solo albums for recording companies such as the American MMO, the Danish label Danacord Records and others. In March, 2016 he recorded the piano works of the Bulgarian pianist and composer Dimitar Nenov in Fazioli Hall in Sasile, Italy for the Greek label Arco.

Galina Dimova was born in Chirpan, Bulgaria in 1967. She graduated from The Academy of Music, Dance and Fine Arts in Plovdiv with distinctions, obtaining an M.A. in Music Education and Piano Pedagogy. In addition, Galina has a PhD on the piano compositions of the Cypriot pianist and composer Nicolas Economou. She has made multiple publications in Bulgarian, as well as in English. She also collaborated with video artist Yiannos Economou, as a composer and performer. Galina plays extensively both as a soloist and as an accompanist and has an unusually wide repertoire, ranging from Baroque all the way up to contemporary music.

Velislava Stoyanova studied “Piano Performing Arts” in the class of Prof. Georgi Petrov and had her Master’s Degree in the piano class of Prof. PhD. Romeo Smilkov (June 2014) in AMDFI, Plovdiv, Bulgaria. Since November 2015 she has been a PhD student at the Department of Piano and Accordion. The thesis of her Doctor’s study is “Piano aspects in the chamber work of Nikolay Stoykov”. Since 2005, Velislava Stoyanova has been teaching piano in Plovdiv and Dimitrovgrad. As a piano pedagogue Velislava Stoyanova has been awarded with a diploma for creative achievements by the Minister of Culture, Mr. V. Rashidov, in the IV competition for music educators – Albena 2010. She had an award of the Rector of AMDFI for 2014 and “Prof. Romeo Smilkov “in 2015. As a pianist she specialized in the piano class of Prof. Zbigniew Faryniarz at MA” K. Lipinski”- Wroclaw, Poland. During the summer of 2018 she started working again in Wroclaw, as a cultural coordinator. During her stay there she presented works by Nikolay Stoykov, Dimitar Nenov, Rachmaninoff and others. Velislava Stoyanova performed the “Three Trophies” op. 80 by Nikolay Stoykov and also participated in the opening weekend of Plovdiv as a European Capital of Culture 2019. On January 24, 2019, she performed Bulgarian and Turkish works with the participation of Romeo Smilkov and Alper Yunuturkur in Radio Plovdiv.

By In Cyprus
Previous articleWatch out parliament, Farage warns at launch of new Brexit Party
Next articleTwo arrests in Limassol after police find 1 kilo of cocaine