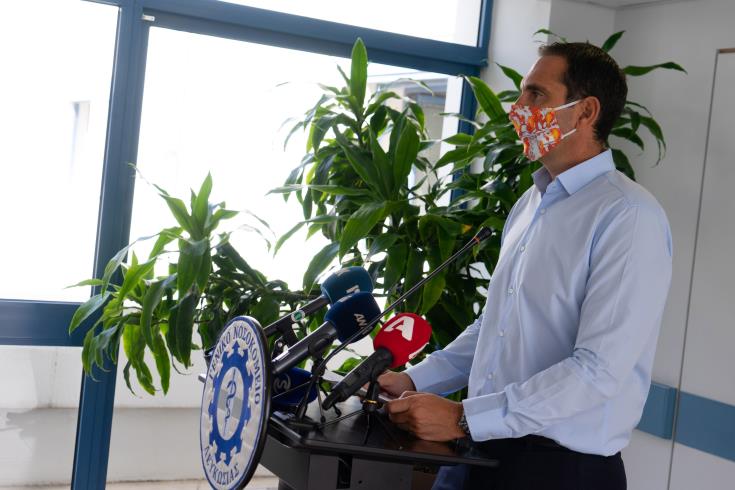 Minister of Health, Constantinos Ioannou, said on Thursday that the goal is not to impose strict measures but rather to make people understand that they must observe the health protocols issued to limit the spread of COVID-19.

The Minister, who was speaking to reporters at the Nicosia General Hospital, where a SPECT-CT imaging scan was delivered, was asked about the measures announced on Wednesday in the Minister’s Decree for Larnaca in order to stop the spread of the virus and protect Public Health.

The Decree was issued due to the increasing positive cases of COVID-19 in Larnaca and will be valid for a period of two weeks.

He pointed out once more the need for people to respect the health protocols and protection measures and stressed that “the aim is not to take stricter measures. The goal is for all of us to realise that the situation is crucial and we must demonstrate responsible behaviour, following the (existing) health protocols”.

Saying that it seems that protocols are not followed by everyone, he gave as an example the 19 cases found among members of a football club who were infected by one person.

The Minister of Health said that protocols must not become stricter or change, what is important is that people follow them.
Asked about the cases detected among nurses at Larnaca’s General Hospital, Ioannou said that all the appropriate measures are being taken in the hospitals so that there is no spread of the virus.

He added that there is personal protective equipment, there are protocols in place and all patients undergo a laboratory test before admission.

But he said that a hospital employee could, through his social contacts, transport the virus to the hospital, adding that is why there are measures in hospitals, to stop the possibility of the virus being introduced into the hospital.

Asked about cases detected at schools, the Minister pointed out that the coronavirus does not respect boundaries, it is an invisible enemy and it was a matter of time that there would be cases in school units as well.

That is the reason, he said, why it is important to have health protocols observed in schools and use a mask etc.

If we follow the protocols that have been developed specifically for the workplace, there is no cause for concern, he said, adding that “if they are not observed, then the cases will increase either in a hospital, in a school, or anywhere else”.

Concluding, he said that the Council of Ministers decided to proceed with a sample testing of 7,000 footballers and this will begin in the coming days.

By In Cyprus
Previous articleStaff object to use of Famagusta Hospital as Reference Hospital
Next articleNine new coronavirus cases detected out of 2,893 tests