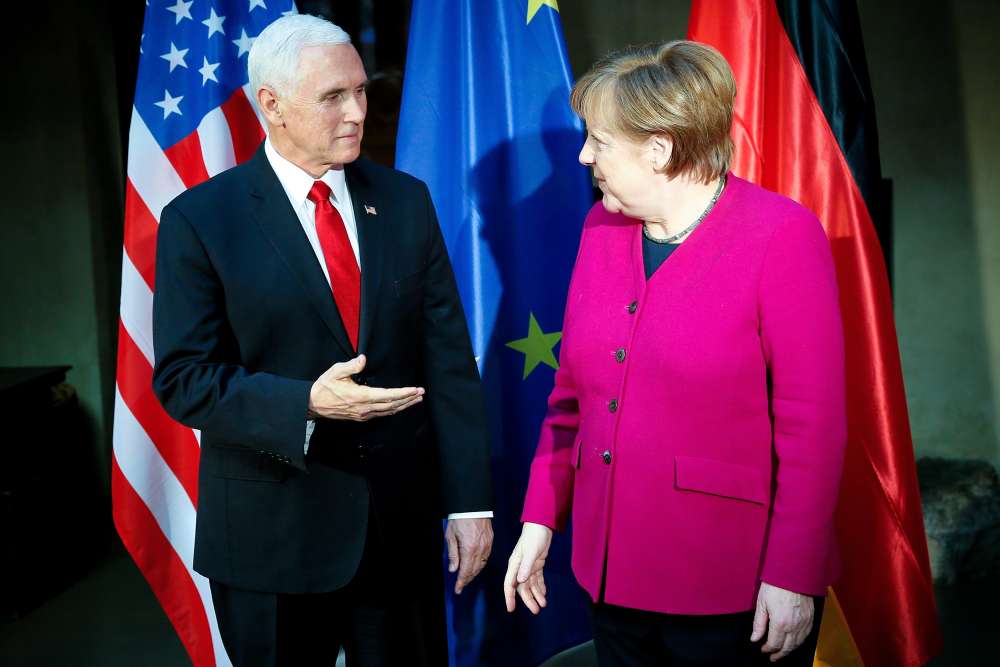 U.S. Vice President Mike Pence rebuked European powers over Iran and Venezuela on Saturday in a renewed attack on Washington’s traditional allies, rejecting a call by Germany’s chancellor to include Russia in global cooperation efforts.

Describing the results of Donald Trump’s presidency as “remarkable” and “extraordinary”, Pence told senior European and Asian officials the EU should follow the United States in quitting the Iran nuclear deal and recognising the head of Venezuela’s congress, Juan Guaido, as the country’s president.

“America is stronger than ever before and America is leading on the world stage once again,” Pence told officials at the Munich Security Conference, listing what he described as U.S. foreign policy successes from Afghanistan to North Korea.

Addressing an audience that included Trump’s daughter Ivanka, Pence’s speech was the latest attempt by a Trump official to put the president’s “America First” agenda into a coherent policy plan.

European leaders are troubled by Trump’s rhetoric, which they say is erratic and disruptive, citing his decision to pull out of the 2015 Iran nuclear deal as undermining an arms control agreement that prevented Tehran from developing a nuclear bomb.

But Pence — who last week during a visit to Poland accused Britain, Germany and France of undermining U.S. sanctions on Iran — repeated his demand that European powers withdraw from the deal.

“The Iranian regime openly advocates another Holocaust and it seeks the means to achieve it,” Pence, who also visited the Nazi concentration camp Auschwitz, told delegates.

“The time has come for our European partners to withdraw from the disastrous Iran nuclear deal and join with us as we bring the economic and diplomatic pressure,” Pence said.

Pence, who used his trip to Europe to push Trump’s policy of favouring sovereign states as opposed to alliances and blocs, took aim at the European Union as a whole, saying “once more the Old World can take a strong stand in support of freedom in the New World” in Venezuela.

“Today we call on the European Union to step forward for freedom and recognise Juan Guaido as the only legitimate president of Venezuela,” he said, calling President Nicolas Maduro a dictator who must step down.

Speaking before Pence, Merkel questioned whether the U.S. decision to leave the Iran nuclear deal and withdrawal from Syria was the best way to tackle Tehran in the region.

She defended plans for a new natural gas pipeline from Russia to Germany that Pence again criticised.

Trump has accused Germany of being a “captive” of Russia due to its reliance on Russian energy, but Merkel argued:

“If during the Cold War… we imported large amounts of Russian gas, I don’t know why times should be so much worse today that we can say: Russia remains a partner.”

During a question-and-answer session, she added that it would be wrong to exclude Russia politically, but Pence said Washington was “holding Russia accountable” for its 2014 seizure of Ukraine and what the West says are efforts to destabilise it through cyber attacks, disinformation and covert operations.

“Geostrategically, Europe can’t have an interest in cutting off all relations with Russia,” Merkel said.

Trump has also criticised the large trade surplus that Germany, Europe’s biggest economy, has with the United States and has threatened to put tariffs on German cars in return.

“We are proud of our cars and so we should be,” Merkel said, adding, however, that many were built in the United States and exported to China.

“If that is viewed as a security threat to the United States, then we are shocked,” she said, drawing applause from the audience.