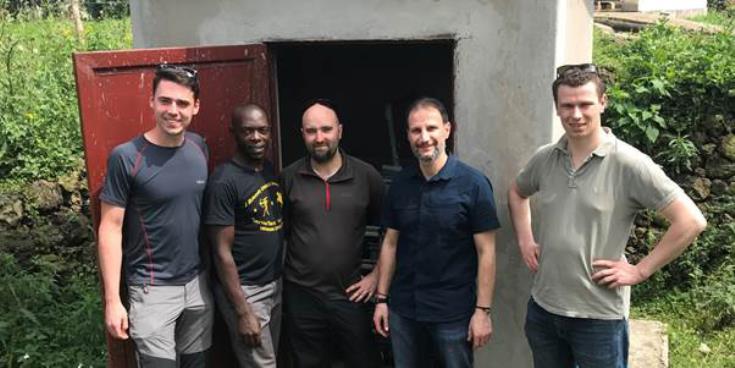 Technology that converts urine into electricity and was introduced in Kenya and Uganda, is now used in Durban, South Africa and will soon travel to Ethiopia.  The PEE POWER® project was developed at the University of the West of England (UWE Bristol) by a group of scientists headed by Cypriot Professor Dr. Ioannis Ieropoulos ,  head of the Bristol BioEnergy Center (BBiC) in the Bristol Robotics Laboratory.

Urine is converted into fuel with the use of Microbial Fuel Cells (MFCs). The energy generated has been used to provide electricity in poor communities in Kenya, Uganda and South Africa. For four consecutive years Dr. Ieropoulos and his team had the honor to show their project in the famous Glastonbury Festival which draws thousands of fans every year.
At the venue of the Festival which this year has attracted around 175,000 visitors, the UK-based, Cypriot born and raised scientist and his team installed public urinals from which urine was collected and converted to electricity using the innovative technology.

In an interview with the Cyprus News Agency (CNA), Dr. Ieropoulos said that the project was warmly welcomed by the fans and the primary goal which was to raise awareness on alternative energy sources, has been achieved.

“Yes we are really pleased and excited. This year we also had the opportunity to get the opinion of the people who used Pee Power in two ways: one was with the touch of a button thanks to the collaboration of two companies that supported us (WhiffAway and Forrester Research) and the second was with a questionnaire. We actually think that our presence at Glastonbury 2019 was a success as 92% of the people from nearly 5,000 people who used the system replied that they were optimistic about this technology application in places in need, ”he told CNA.

The project has traveled to Uganda and Kenya and is currently providing immense benefits to communities and villages where the population is faced with many problems. More recently the technology has been applied in Durban, South Africa and in the near future it the technology will be installed in Ethiopia.

“This is the most satisfying part of our research. The technology is applied in communities that really are in need and it is exciting to see the benefits for the people who use it. It improves their living conditions. For example, in Uganda, where technology was applied in an all- girls school to provide toilet lighting, there was a serious problem of attacks by guys who were violating security fences and hiding in dark toilets, “he said.

Dr. Ieropoulos said that he and his team were extremely touched when they were briefed by the school’s Principal that these incidents have been eradicated because now there is light in the toilets and the perpetrators can no  longer hide.

Ιn Nairobi, Kenya, the project was introduced in a mixed primary and secondary school located in one of the slums in the north of the city. The school did not have any toilets in the past.

“Now with the help of ACEF, a charity organization that finances the construction of schools in poor areas, toilets have been set up and our technology is applied. Now there is light inside and outside the toilets. Most recently, in May 2019, in collaboration with the University of KwaZulu Natal Pollution Research Group, we also implemented a Pee Power® system in an informal settlement in Durban, South Africa, in a complex of toilets used by the families in the community. Now there is light in the evenings and this has improved their lives and the conditions they used to live in”, he told the agency.

In Ethiopia the project will be introduced in a refugee camp ,  with the full support and cooperation of OXFAM.

Dr. Ieropoulos strongly believes that this technology, as well as others, may provide the right background for debate on alternative forms of energy. He explains that there are other technologies, even nature-based solutions, which come to use natural resources, such as mangroves, to enhance the local environment where prior damage or destruction has occurred.

“So technology really gives us the framework for discussion, especially because it uses natural microbes that purify, or `process`, human waste for the benefit of humans, habitat and the natural environment,” he says.

He explains that the technology him and his team developed, using the microbial fuel cells is in essence a platform from which a multitude of applications can be developed in many areas, such as e.g. urban waste treatment, electricity generation in developed as well as remote areas, disinfectant composition, fertilizer production and more

“This means that it can be applied wherever there is a need, provided that there is organic material or organic waste, ie not only in countries with low growth rates,” he concludes.