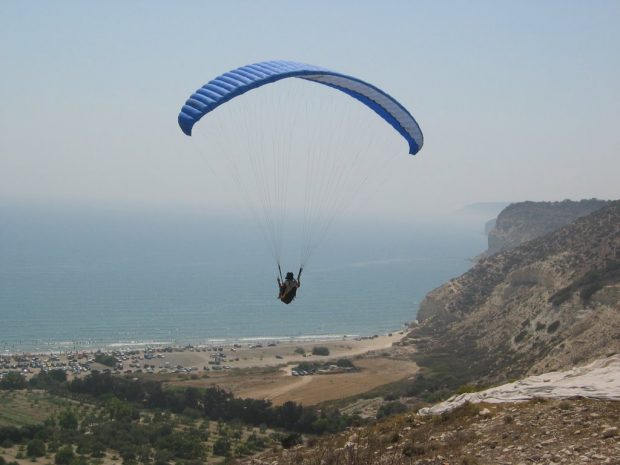 Kourion (or Latin: Curium) was an ancient city on the southwestern coast of Cyprus, located atop a limestone headland at approximately one hundred meters above sea level along the coast of Episkopi Bay in Limassol district. Being an important city kingdom, Kourion comprises many ancient monuments most of which date back from the Roman period. The Greek Roman Curium Theatre is perhaps the most impressive site of all, with remarkable acoustics and breathtaking views. The Theatre has been fully restored and is now used for musical and theatrical performances.
Even though paragliding is a relatively new sport in Cyprus, Kourion has been of the main soaring sites since the sport was first introduced on the island. The spot is flyable in mainly southwesterly sea breezes. When the wind blows from southwest, the entire ridge is soar-able, with smooth air, though you may encounter some mild turbulence due to the thermals coming up from the bowl below.

As the wind shifts to more westerly, its strength tends to increase, making the changes in air masses more obvious too. It is highly advised that only experienced paragliders launch off at these conditions and only using the launches at the middle of the ridge. Landing in the bowl becomes significantly more difficult with western winds. All pilots are urged to land immediately at the first sight of white waves in the sea and keep in mind that if you think it’s too windy to fly, it probably is and for your own safety, it’s better if you don’t.

There are two launch sites at Kourion, with the armpit being the easiest one. It’s also easier to get to and therefore it’s the one used most often too. However, this is the launch spot that should not be used when the wind is westerly, due to strong turbulence occuring. The Lower Sand Pit launch spot is used when the winds shift stronger. New pilots needing a less vigorous breeze at launch also prefer this launch site.

The landing zone is just off the sandpit launch to the beach road. It is vital that you land on the ridge side of the beach road, as the area is fully crowded in the summer, with the beach side of the road packed with cars and many bystanders and drivers who will often stop in your way while landing, to watch. The surrounding area is working ground for shepherds and land-workers who have been there years before paragliding came to Cyprus, so respecting their wishes and keeping away from their animals means respecting the land accommodating your sport.

The antiquities of the area are of hight national importance and a world-renowned treasure, so flying and landing near the antiquites site is asked of all pilots. This preserves both the antiquities from any damages, as well as the pilots from accidents.