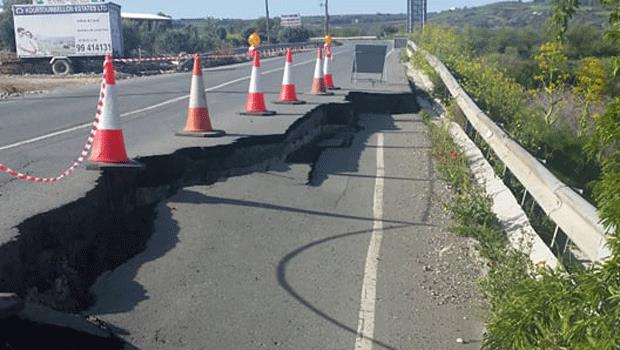 For the second time in a year the main Paphos -Polis Chrysochous road has been torn after days of rainfall, philenews reports.

Police and the Department of Public Works have reportedly already put in place the necessary signage and traffic arrangements in the area, and have conducted some temporary restoration works.

The damage is found on a left turn before Yiolou village on the road that leads to Polis Chrysochous from Paphos, where the same damage occurred last winter.

According to Yiolou Community Council official Sylvia Antoniou, after the last heavy rainfall, some displacement of chunks of earth took place on the side of the road once again.

“Despite the work done at the time, the damage has reappeared, and today the road is torn, with a large section of the asphalt cut in two,” she said.

“The competent authorities need to intervene to put concrete in the damaged section, but this is not a solution, as vehicles pass through this area is as if they were passing by boat.”

The repair of the damage, Antoniou said, should be done properly, as this is the main road artery linking Paphos with the Chrysochous area and the traffic on the site is continuous.