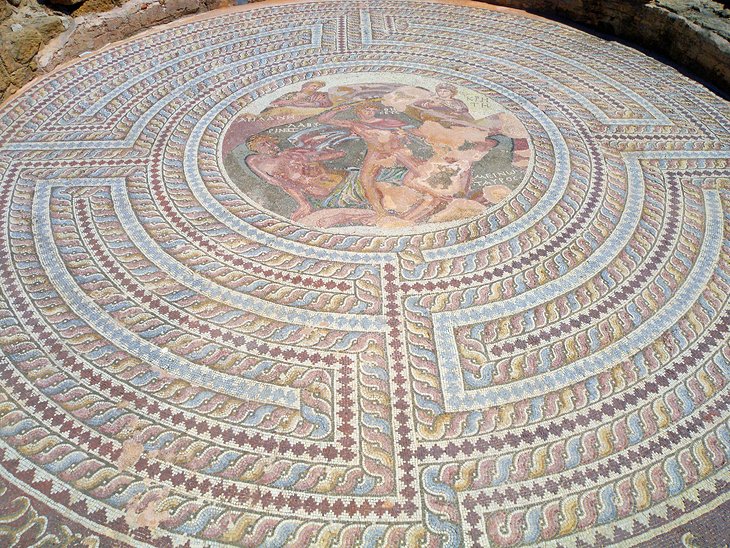 The Paphos mosaics have been included in an ambitious  $100-million, decade-long global initiative announced by the J. Paul Getty Trust to preserve antiquities across the world from threats such as sectarian violence and climate change.

Working in partnership with the Department of Antiquities in Cyprus, the Getty Conservation Institute will devise a strategy for preserving the mosaics through a possible combination of archaeological shelters and reburial to avoid damage from the sun, sea and air.

“If you leave them exposed without a shelter you need continued maintenance,” Jeanne Marie Teutonico, the associate director of programs of the Getty Conservation Institute told the New York Times.

James Cuno, president of the Getty Trust, said the threats to the ancient world were “not just from militants and attacks, but from climate change, overdevelopment, mass tourism”.

At Paphos the initiative will seek to protect ancient mosaic pavements from the pressures of tourism and the heavier rainstorms recorded there in recent years.

“Working in partnership with the Department of Antiquities in Cyprus, the GCI will develop a conservation master plan to guide the preservation of one of the richest sites of mosaic pavement in the Mediterranean, with significant remains from the Hellenistic, Roman, early Christian and Byzantine periods, as well as Frankish and Ottoman monuments,”  the Getty said on its website.

“In an age of resurgent populism, sectarian violence, and climate change, the future of the world’s common heritage is at risk,” said Cuno

“Cultural heritage embodies a global community united by a common need to make things of beauty and usefulness, and to compose stories and rituals about humanity’s place in the world. We will launch with urgency and build momentum for years to come. This work must start now, before more cultural heritage is neglected, damaged, or destroyed. Much is at stake.”

Over the coming year, Getty will engage major global partners from schools and universities, cultural institutions, non-governmental organizations, and the private sector in this urgent work. Activities are underway now, with an official launch planned for summer 2020. The initiative will continue through 2030 and beyond.

Broad in scope, Ancient Worlds Now: A Future for the Past will make a significant and lasting impact by:

•             Creating effective conservation strategies that can be applied on a large scale to increase scientific expertise and global capacity to save what remains;

•             Pursuing deep inquiry, including through advanced digital research techniques, to strengthen our understanding of the interconnections and fluidity between and among ancient cultures.

In addition to partnerships, Getty will dedicate the cross-disciplinary work of its four programmes—Getty Foundation, Getty Research Institute, Getty Conservation Institute, and Getty Museum—to this effort.

By In Cyprus
Previous articleCyprus banks must shrink further and lay off staff, says Finance Minister
Next articlePhilippines to vaccinate millions as polio virus resurfaces